As of January 19, membership in the Flickr group is closed and no new members will be added to the blogroll.  The Ravelry group will remain open (kind of an experiment, and also because it can't be limited or closed), so check it out.

Home of the ABC-Along 2008.  Get your cameras ready!!  Use any of these buttons, if you'd like; be sure to save them to your own computer/server. 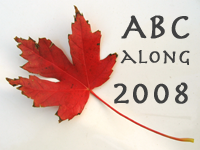 This is a very loosely run whatever-along ship, so the "rules" are pretty simple:  It's a year-long group where participants post a photo to their blog and/or (if blogless) the ABC-Along 2008 Flickr Group every two weeks to correspond with a letter of the alphabet; there is also an ABC-Along 2008 Ravelry Group.

Photos should reflect the personality of the photographer; the subject should be of importance or meaning to them; photos can be related to fiber, but it is not required.  Post at least one photo in each 2-week period to match the corresponding letter of the alphabet. There are 52 weeks in a year and 26 letters of the alphabet, allowing 2 weeks per letter (Weeks 1&2=A, Weeks 2&3=B). Example: - "A" is for... Alaska, asparagus, alpaca, astronomy... Whatever you choose, it should have some meaning for you.

ETA:  My intent – what I had in my mind – was ONE well-chosen THING and ONE well-chosen PHOTO to represent each letter; possibly several other photographs to illustrate and explore that thing, but not TWENTY different things for each letter.  Choosing only one subject forces one to think and be disciplined.  What is the BEST representation of YOU for a given letter?  What is the best way to portray it, frame it, shoot it?  I did not choose my words very carefully, however, and left the door wide open to post a number of different things for each letter (neither is there a limit to the number of pictures that can be uploaded).  I'm not going to change the "rules," but the intent is something to keep in mind and I think, in the end, it would be a much more meaningful body of work, both as a whole and as a representation for each participant.

That being said, it's a loose ship and the most important thing is to have fun, so... HAVE FUN!  If there are any questions, please contact me via Flickr (Vicki Knitorious) or Ravelry (knitorious) or by email (vknitorious @ gmail . com).