All of my knitting was in the dog house over the weekend. I may have been suffering a post-project slump after a) "Catamount," my Alabama Chanin A-line Tunic, and b) those busy and productive few days off with the boys.

A slump is the perfect time for hexagons, and that's exactly what happened on Saturday morning at the farmer market. 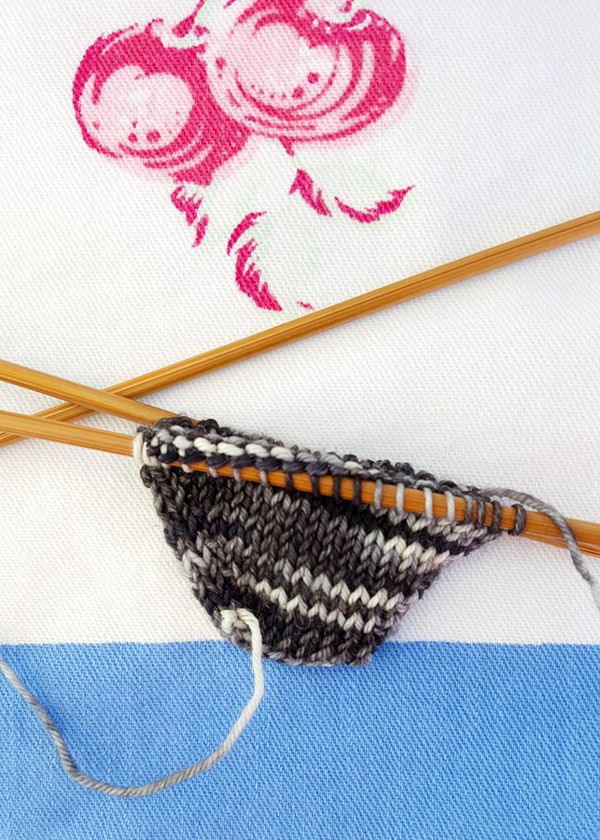 Later on Saturday, I actually made an attempt at laying out and assembling a strip quilt that I've had cut for ages. That ended up in the dog house, too! I think I'm forcing it and need to do some editing (I think there's more than one quilt happening there).

Needing some craftual satisfaction, I turned to my potato chip project du jour, a romper for Junah! I'd recently picked up a Green Bay Packers t-shirt at the thrift store (new, with tags) for just that purpose, following the same method as for Baby Captain America! 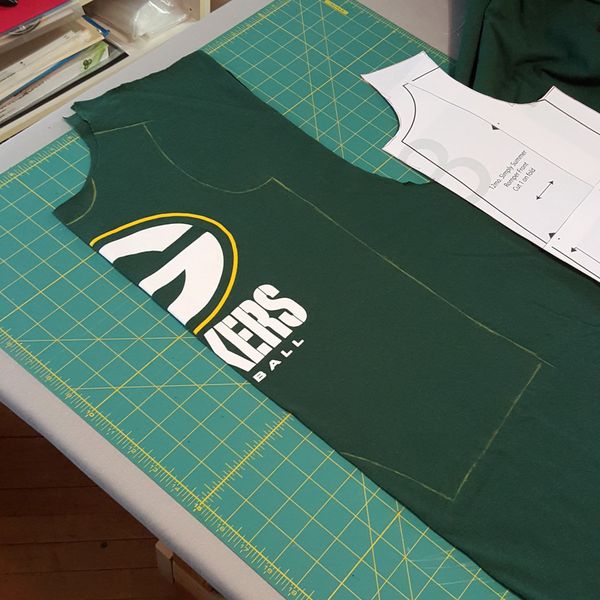 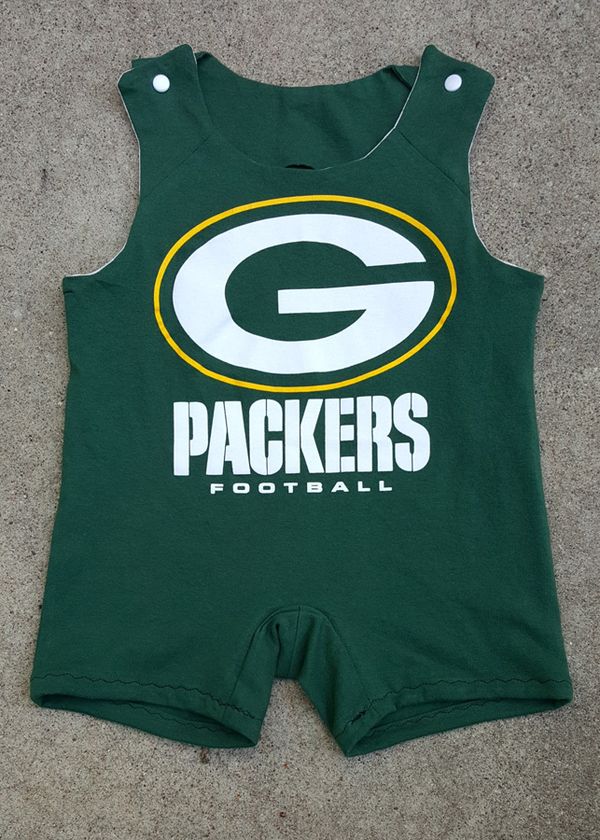 Three hours later, I'd finished everything but snaps, and added those on Sunday morning. I was able to get all but the front facing from one t-shirt (size XXL, I believe). There's still plenty of room for a diaper butt, but I left off the snaps at the crotch this time.

Sunday was the first day in a while that I didn't have to be somewhere or take care of someone, and it seemed like a good day to play around finally try airbrushing. It was windy outside, so made part of the garage floor my work space (the part that isn't taken over by the indigo operation, art gallery displays, and bicycles) (also known as where I normally park my car but haven't in months) (and all that stuff will relocate by the time the snow flies!). 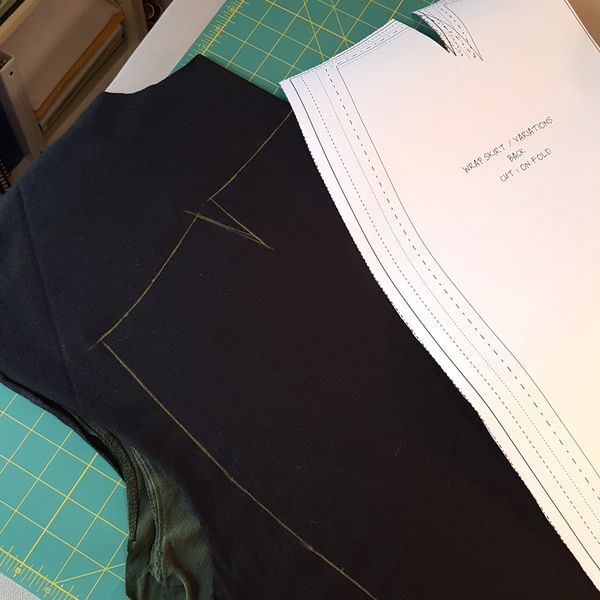 I chose two old mismatched green t-shirts and one new black one to provide the fabric for my "muslin" of the Wrap Skirt and to test the airbrush/compressor set up.

I mixed paint, fitted everything together with our little air compressor, laid out some old towel-rags on the garage floor, and had at it. I painted one piece at a time, the stencil being large enough to cover each piece without having to reposition. Some time ago, I'd purchased the large all-over mylar stencil in the Angie's Fall design -- it's one of my favorites, and I'm not sick of it yet!

Inside front, Back, Outside front

All the while I was thinking that it would be really great to learn the finer points of stenciling (from start to finish) and, thanks to my $5 for Florence campaign, that might will happen someday.

The design is a little soft in the middle of the back piece (where the stencil was not adhered to the fabric very well), and it was while spraying the outside front piece that I was running out of paint, so it's splotchy in places and sparse in others.

I had barely enough paint, having first mixed my color concoction (a little black, a little white, a little silver) in a small 2-oz. jar. Turns out that the mouth of that jar is too small for the airbrush fitting, so had to dump it all into a 4-oz. jar and there was a fair bit of waste.

Clean up was interesting... 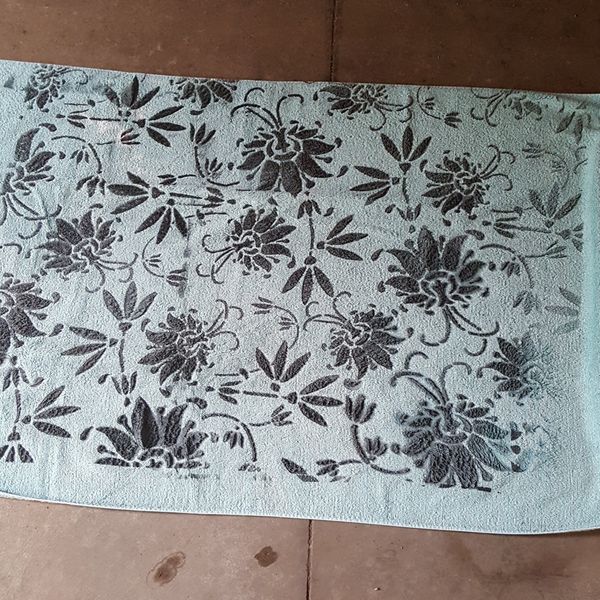 That's the towel upon which I did the first scrubbing of paint off the stencil. I win for fanciest rag bag contents! I finished cleaning up in the bathtub and "sticking it" on the tile wall. Clean up sure takes a while. 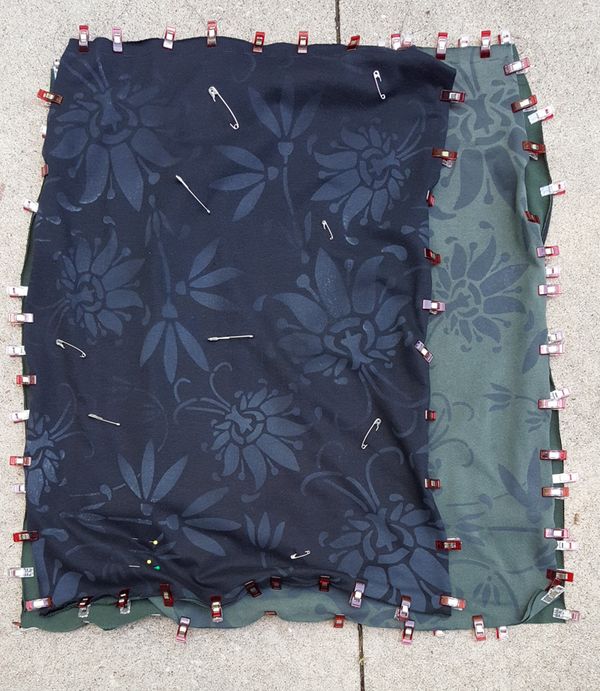 I've already begun stitching. I'm not sure how far I'll go with that... it would be nice to have a wearable piece, even just for running around, but it is just a "muslin" and my time might be better spent. We'll see. I'm content for now.

Thoughts & things: I made a slight cutting mistake on the inside front piece (it should have been mirrored with the outside front, and was not). I might try a button (something other than a tie) on the inside. One of the old green shirts is so soft and worn that it feels like velvet against my skin (it also has a few holes - the straight pins show where not to cut!).

I love how I can always count on reading about something new, creative, messy, interesting, and beautiful on your blog! I've admired your AC sewing but never given much thought to the fabric or stenciling. I have a new appreciation!

That little onsie is SO cute!!!

After hearing of your adventure I now know I'd be no good at stenciling. I'll let the Factory take care of that. I love the skirt and hope it becomes wearable at some point. You learned so much about the process just with this one project (so did I) that the next will be easier and, hopefully, go more smoothly.

Another adventure in multi-crafting! Your stenciling is beautiful and I love Junah's latest onesie. I can see why your knitting isn't as inspiring right now!

All I've gotta say is wow! And that onesie is fab!

When I looked at your first photo of the stenciling project I thought the design was marijuana leaves ;-)

And the GB Packers t-shirt is PERFECT! for a onesie.

The reason I buy AC kits for my projects: I am totally Freaked Out by the stencilling!!! You give me hope. Maybe I'll try it some time. (In the meantime, I have a skirt kit to start stitching. . . ) (LOVE that little Packers romper! So dang adorable.)