From a man's 4X pocket tee to a woman's boatneck swing top. 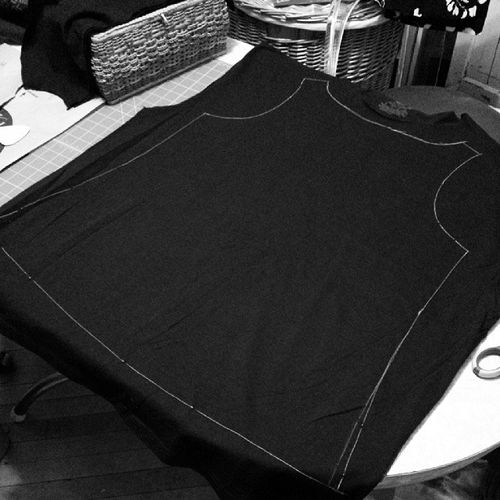 I love how my first top turned out, and was a bit more careful with the traced chalk line this time around. I used two tried-and-true tops from my own wardrobe as a pattern template: the same boatneck that I used for the previous project as a guide for the top of this shirt and a favorite swingy A-line for the bottom. I had the fabric and it's a favorite shape, so why not? 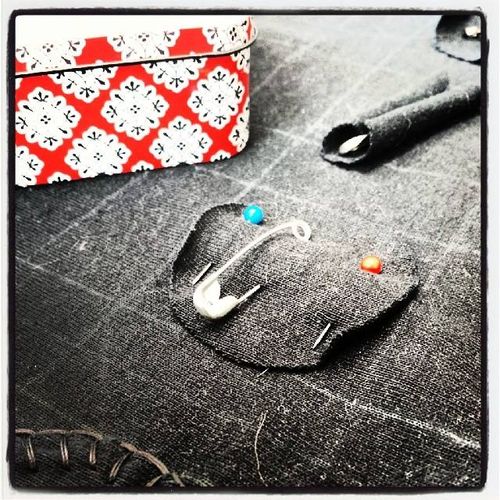 I fell in love with some tone-on-tone polka-dot tops at Alabama Chanin and had those images in mind when I drew a chalk-line grid on the front of my shirt. I used the top of a spice jar to trace 2" circles and cut them out. My first inclination was to cover the front with dots... that's a lotta dots! I decided to space them out more, figuring that I could add easier than subtract. 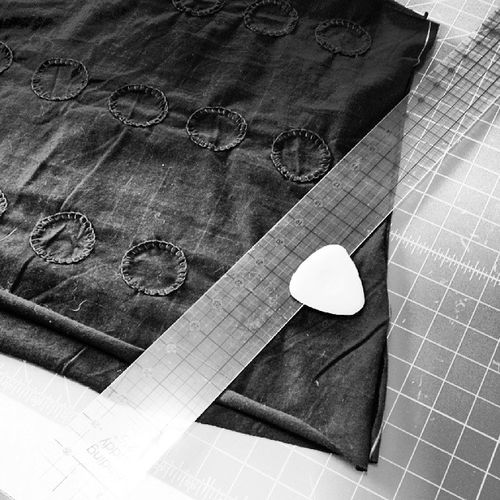 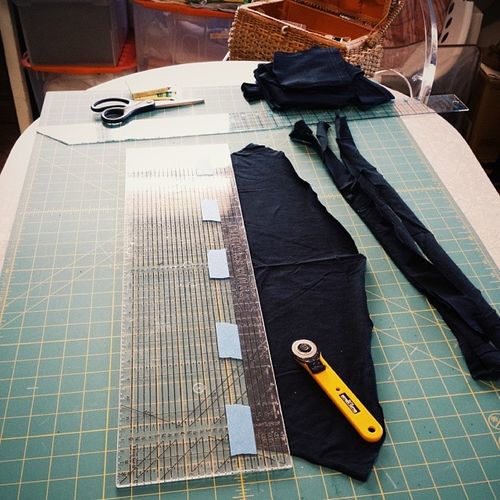 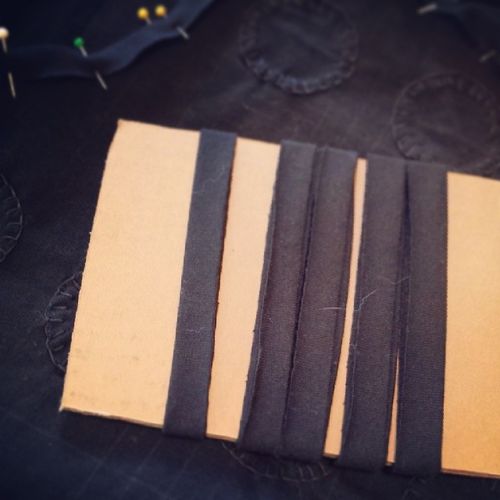 I attached the dots with blanket stitch; seamed and felled on the outside; used a vertical stitch to apply the binding to neck, armholes, and hem. 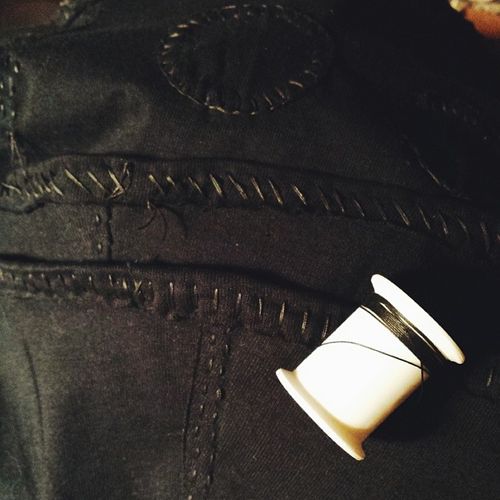 There are "those moments" in sewing just as in knitting. More black thread wouldn't be hard to get, but I had only the one spool and no more at hand! It was SO CLOSE. 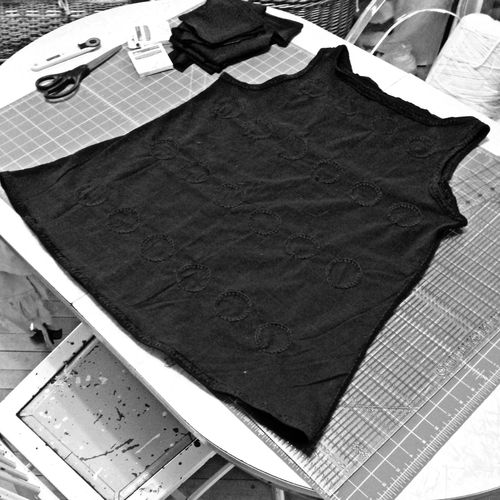 It's not easy to photograph a black-on-black top! The photos above and below are when sewing is finished and before I threw it in the washer. My chalk-line design guides faded but remained visible throughout the process.

I purchased the 4X t-shirts on Wednesday, March 18th and finished on Wednesday, April 2nd -- the sewing up was complete the day before, but Wednesday is when I pulled it out of the dryer and over my head, ready to wear!

I'd have finished a bit earlier if I hadn't forced myself to put it down after the applique was finished in order to finish knitting a hat. I couldn't pick it up again until the hat was done! 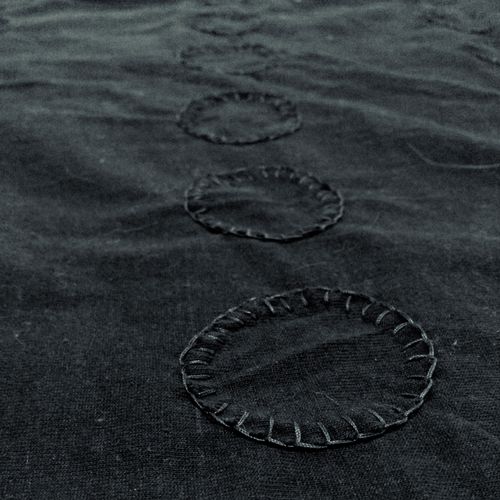 And after washing. It softened up beautifully. 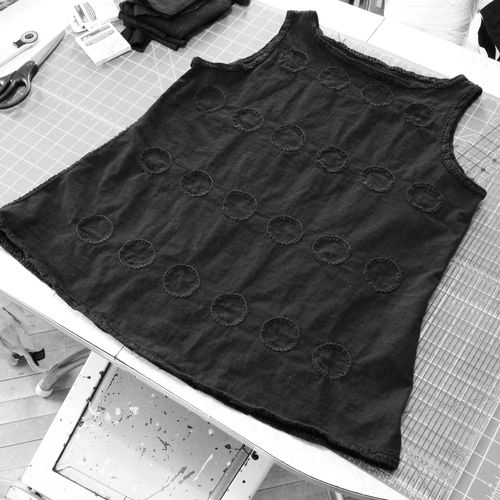 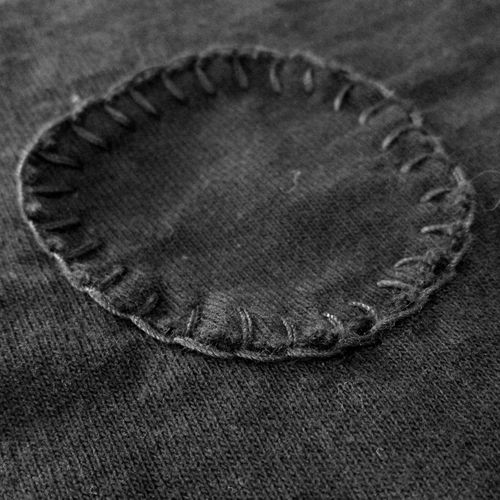 I absolutely LOVE IT! 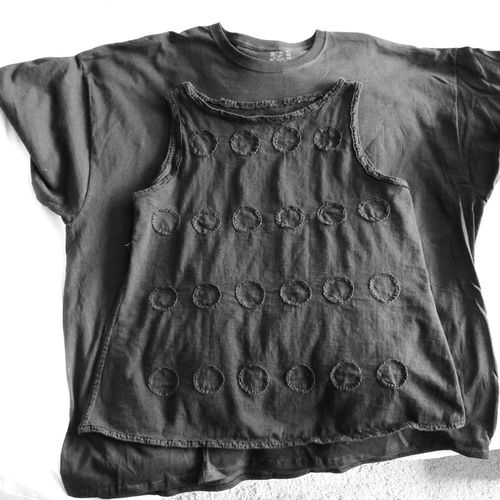 From that to this.

This is not the last of that! 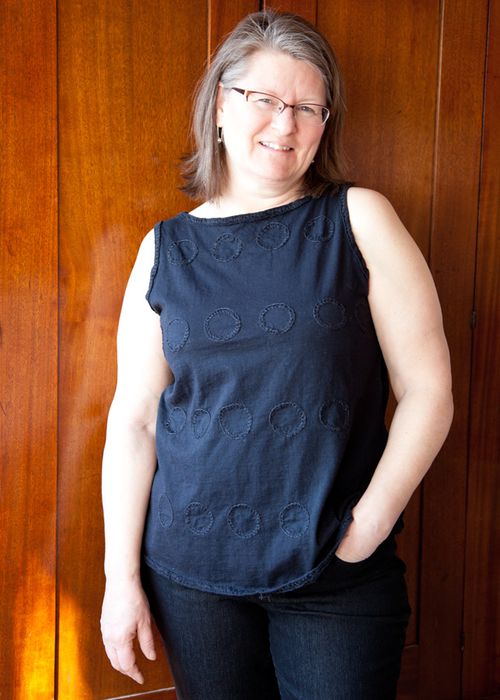 Finito and a modeled shot! New haircut, too!!

Love it! Can't wait to see it in person at Knit Night!

SO AWESOME! Great job of upcycling from big-T to a top you'll love wearing!

That's fantastic! So how long did that all take?

Wonderful transformation! Mr. 4X wouldn't even begin to recognize his old shirt. I'm also admiring your hand stitching; it's so even and precise.

Amazing! and beautiful! and I can't wait to see it modeled!

Love it! What a gorgeous top!

You are so clever! I love the top you made. Thinking about the sewing, however, made my head hurt. :-) My Grandma always sewed. Sadly, the sewing trait is not genetic.