Never Give Up!
Still peeling

I quickly passed through all of the airport security lines without problem, retrieved my luggage and peeled off the last little bit of "Wisconsin winter" clothing along in the process (except for the leggings and compression knee-highs, which, you can be assured, I took care of ASAP), looking for familiar faces... which I did not see! I stepped outside and realized that I didn't know what make or color of car to even look for, but stood out there for a while anyway. Then went back inside. Then outside. Inside. Outside. Inside. Every time I went out, I'd be approached by one of many a nice young man wanting to hail a taxi for me. We didn't speak the same language, but the message was crystal clear. Also, how damn friendly they all were, and cute. 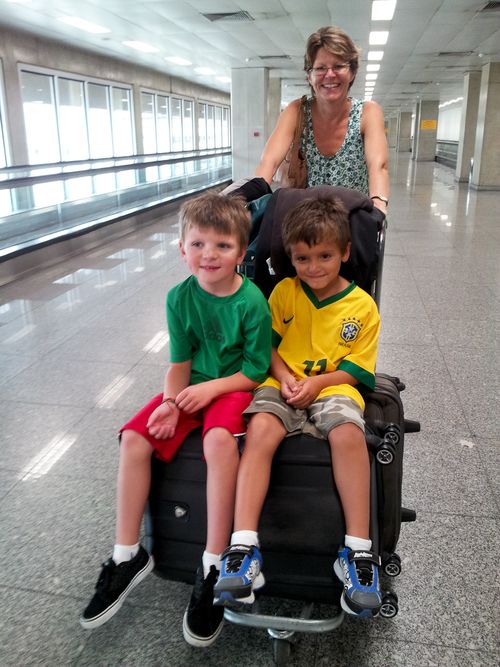 Finally! I heard my name and saw Annie, Brian, and the boys. Turns out they were looking for me in the right place, generally, but a level above!

We stopped for a bite to eat, at Casa da Tata, where I had my first pao de queijo -- the boys' favorite thing to eat! 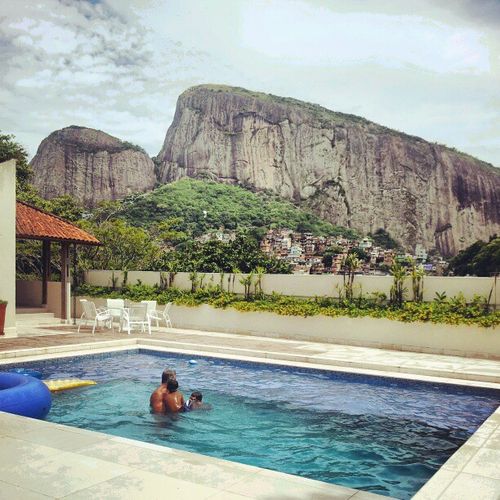 Afterwards, we went to their house and that spectacular view I've seen over the past six months is, well, truly spectacular. The mountain formation is the Dois Irmãos (Two Brothers) Peaks, with a portion of the largest favela in Rio, Rocinha (ho-seen-ya), visible at its foot, and the Zuzu Angel Tunnel running through it. 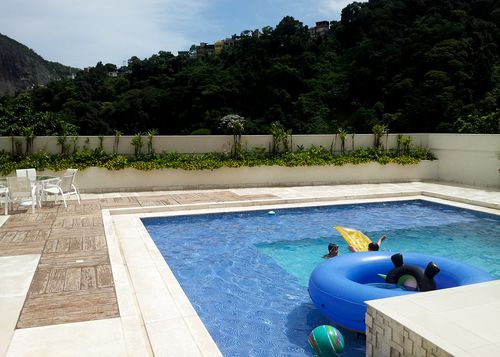 That's the view from the pool-side doorway to my bedroom. 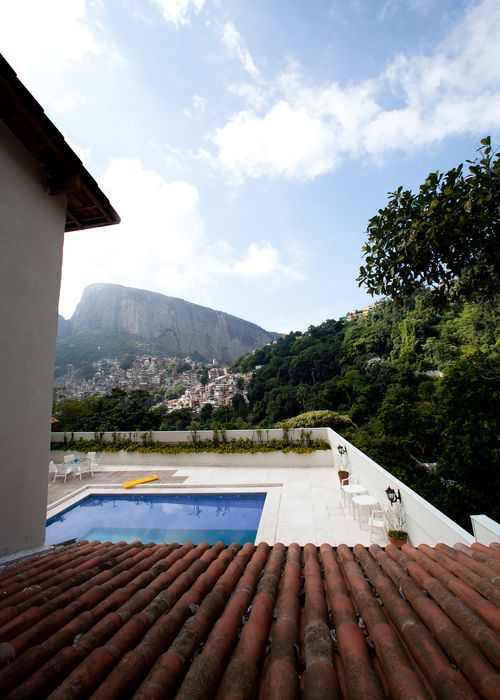 We dropped off my luggage, I took a quick tour of the house (the 3rd floor porch view, above), and then we headed off for Cook In Rio!

And that did not happen.

Long story short: My first lesson in Plan B, which we basically made up as we went along. 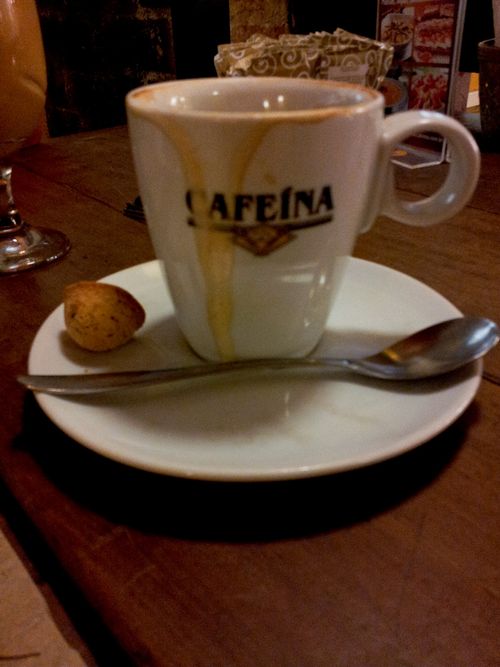 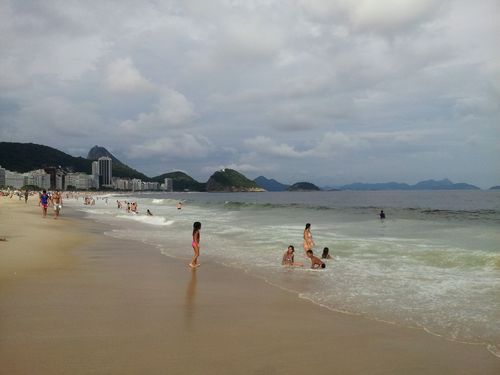 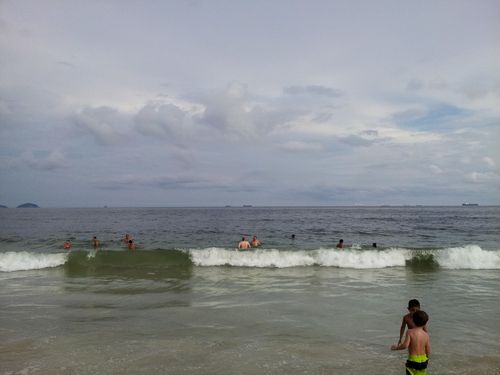 A walk on Copacabana beach (where I may have gotten a little wet). 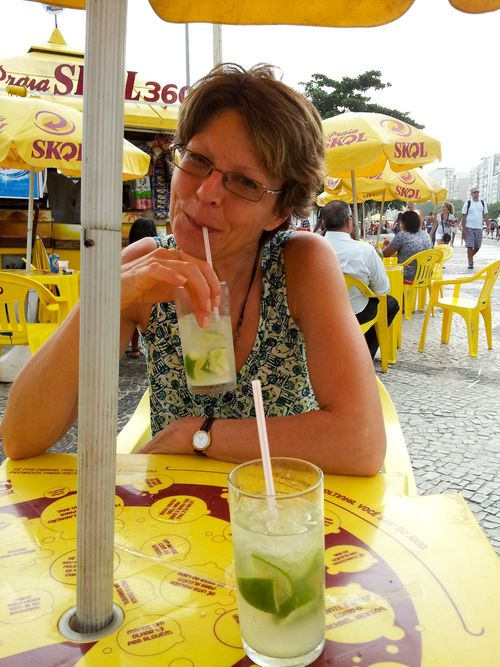 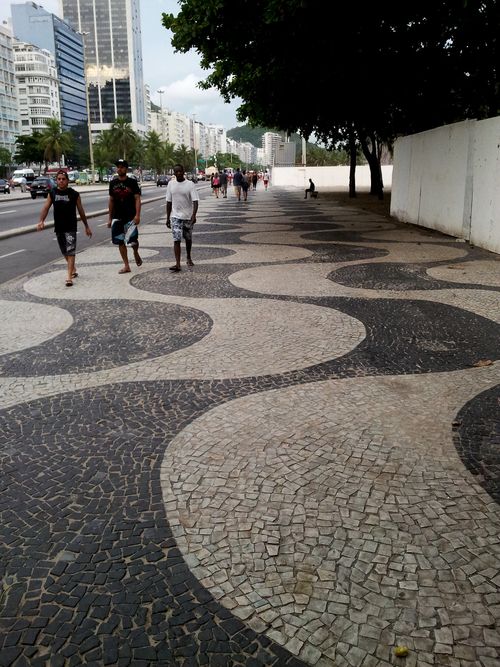 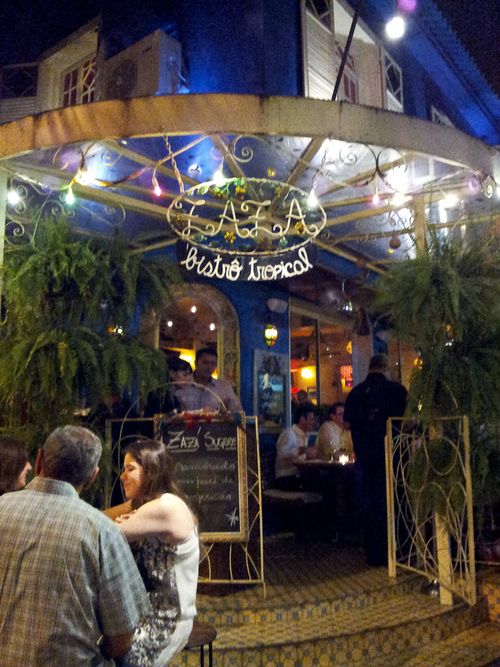 Dinner at Zaza Bistro Tropical. This was actually on Annie's list of places for us to go, so when we found ourselves in the neighborhood -- early enough that we were able to sneak in ahead of reservations -- it was just moved up on the list! 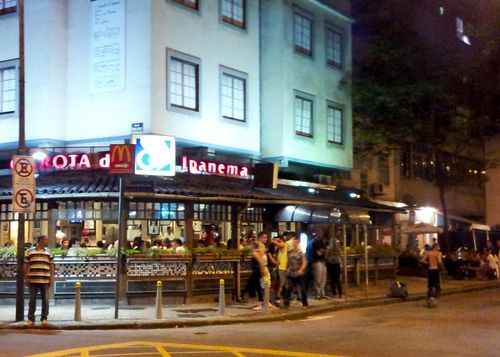 The line was too long at Garota de Ipanema, so we had after-dinner drinks across the street instead. Garota de Ipanema means "The Girl From Ipanema," and that bar is supposedly where the girl from Ipanema walked by and voila, a song was born. The lyrics (in Portuguese) are written on the sign on the side of the building (barely visible in the photo above).

I thought Herb Alpert sang the version that's been running through my head, but it must only have been his instrumental (he didn't sing much) version of this wildly popular mid-60s song. Those were my formative years, musically speaking, and I'm pretty sure I somehow mashed up the rare Herb Alpert vocal on This Guy's In Love With You + The Girl From Ipanema.

We stopped at the grocery store for a few things before hailing a taxi for home. 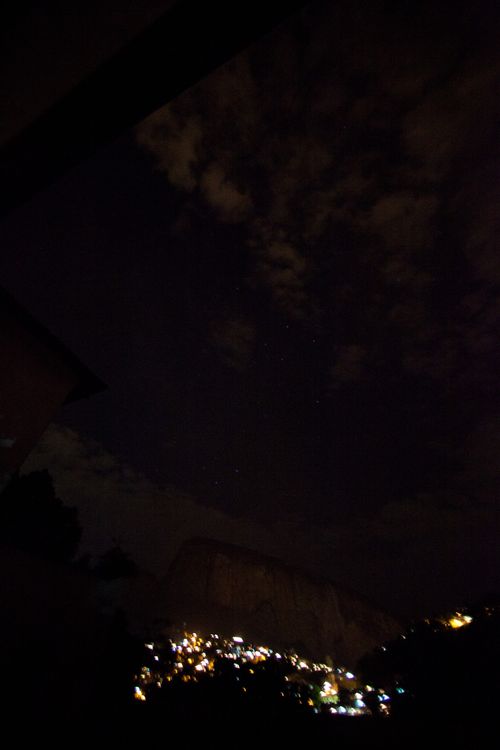 Rocinha was simply amazing. I never tired of looking and listening, day or night. In the week that I was there, it was never ever dark. It was quite loud, all night long -- music, voices, life -- on the first few nights I was there, but eerily quiet on the last few. Except for the dogs. A chorus of barking would rise up and move 'round at regular intervals throughout the night, every night. And the roosters. I smiled to myself the first morning and thought, Hm, they must not have those rules about not having roosters in the urban chicken coop here. Heh. 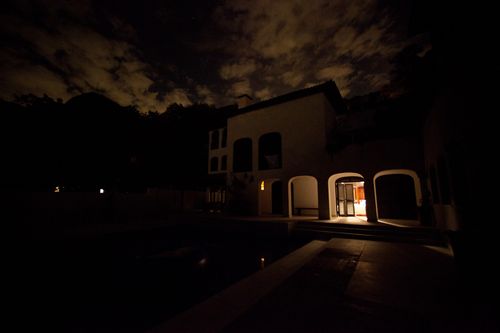 Ann and her family are very lucky to be able to live in such a fantastic house during their first year here. It's quite close to school/work, very roomy, and quite comfortable. It would be pretty near perfect if the neighbor's/landlord's gigantic dogs didn't keep eating their car's windshield wipers for lunch! 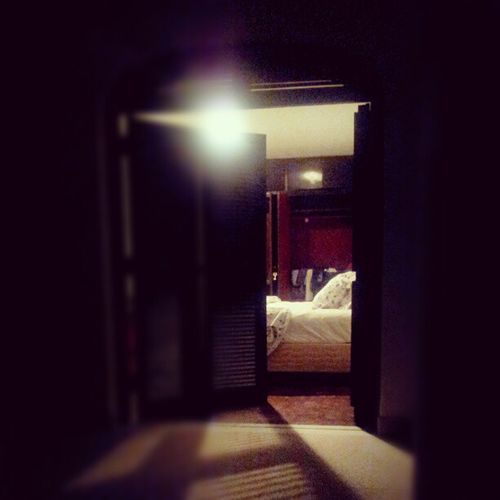 That's my room from the outside looking in.

I got caught up reading about those cheese buns and almost didn't come back.
Nice house they have with that view! Rio sounds like a busy place.
Hot humid tropical - that would be very nice right now.

wow! I'd add bright and smiles to your list! can't wait to see/hear more about your trip!

You have always seemed to be a person who could go with plan B. The picture of the sky at the beach is spectacular! I love hearing the Portuguese lyrics to Girl from Ipanema.

Wow - what a view to have from your house.

Looks so wonderful! Having a pool outside the bedroom sounds so exotic. :D

Oh, the handsome men in Brazil. You realize quickly, after looking around, that Brazilians are a good-looking lot. I don't know if it is because of the wonderful mix of genes (Portuguese, aboriginal, Asian, African etc) or just the beaming smiles, but my heart skipped many beats in Brazil.

Pao de queijo is one of my favourite things! It's the South American answer to the cheese biscuit!

The Girl from Ipanema is such a great song! What a cool, cool, COOL vacation! I can't wait to hear more.