I'm still bitter over the demise of yesterday's post, but it's time to Just Do It again. New plan: upload all the photos, then add the words.

Last year, for the first time ever, Rusty flew out to California for his more-or-less annual ocean/beach infusion. He was in a position to give up his seat for a later flight on the way home, as is sometimes requested, and was awarded a travel voucher in return. Offered up for any of us to use, I had thoughts about Rhinebeck, Kate had thoughts about visiting west coast friends and, just like that, a year goes by, expiration is looming, and Brazil is on the table.

I did some research and found that it would cost $x in addition to the voucher, which just so happened to be the total cost of a flight to Brazil on a different airline (practically from my back door, too). Well, that's sort of a no-brainer, huh? I booked a mid-January flight to Rio on the other airline -- and still had a voucher to use!

This year, Rusty's trip west not only occurred later than usual, he'll also be away longer. He's working his way from the first stop in Idaho, through Washington and Oregon, and eventually all the way to his brother's and dad's in Southern California. Also gone for my birthday, we determined that he'd be in the Bay Area then and, well, wouldn't it be nice...

I landed in San Francisco early Friday afternoon. Rusty'd packed a little lunch and our first stop was at the beach for a snack. Having done only a drive-by of Chinatown when we were there in 1995 with the kids (not to mention that my main focus then was on a 4yo, not sightseeing), I wanted to visit there and also Fisherman's Wharf.

On the way, we drove through the beautiful Presidio and also stopped at the Palace of Fine Arts - just as a couple of bridal parties were arriving for photos! Adorable. 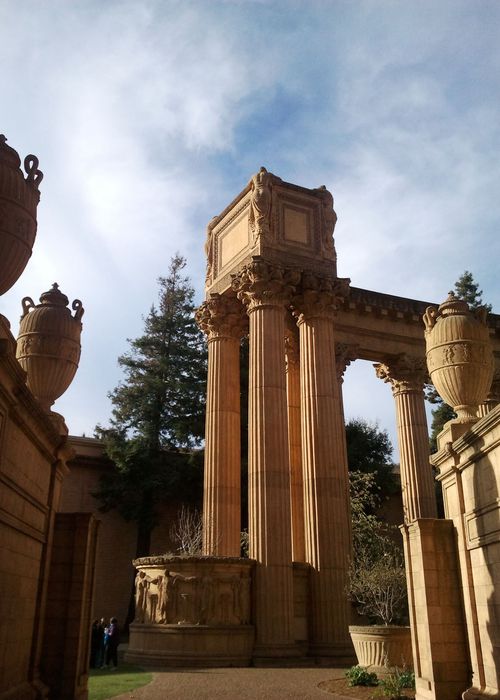 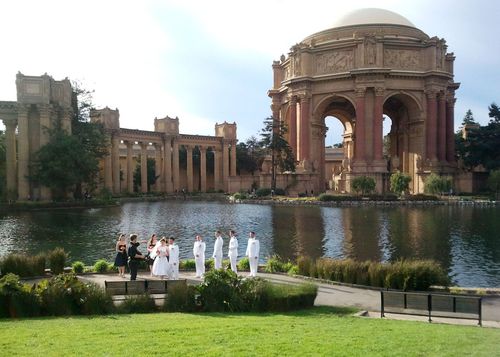 Chinatown on a Friday afternoon is very busy! We walked up a crowded "local" street and back down another that was definitely more geared toward tourists. I was intrigued by the roasted birds of all sizes in the windows -- chickens and ducks, certainly, but also some small enough to fit in my hand. Rusty found himself at a bakery counter ordering what he thought were two large almond cookies... and, um, they were not almond cookies! 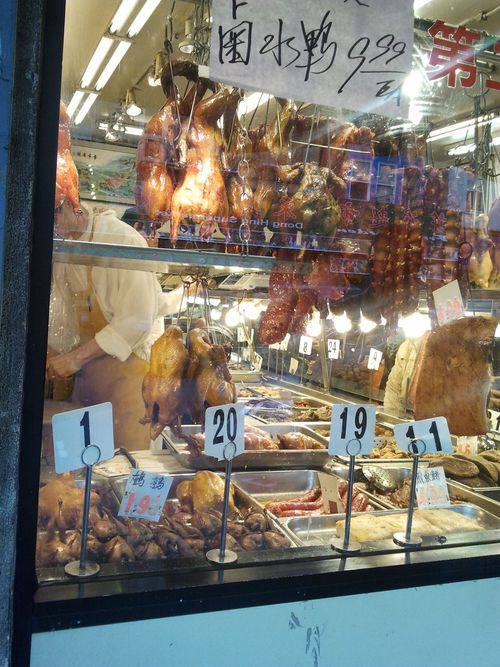 I posted the photo from Alioto's on Fisherman's Wharf the other day. The view was spectacular, and we had a fabulous dinner. Rusty had trout, I had sand dabs (similar to flounder), and we shared dessert.

We stayed in San Rafael -- the first night in the guest room, but the rest of the time in the houseboat. 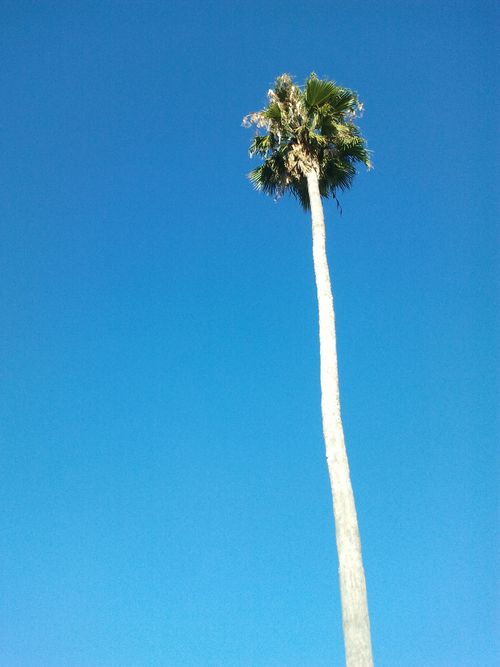 Toto, we're not in Wisconsin anymore! 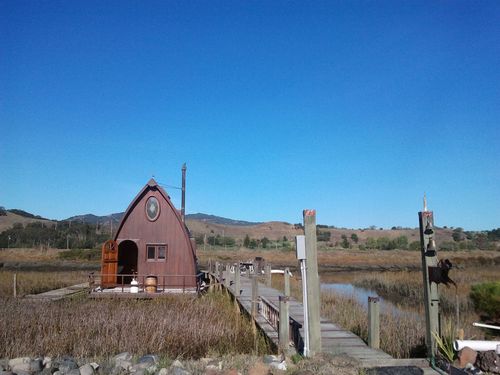 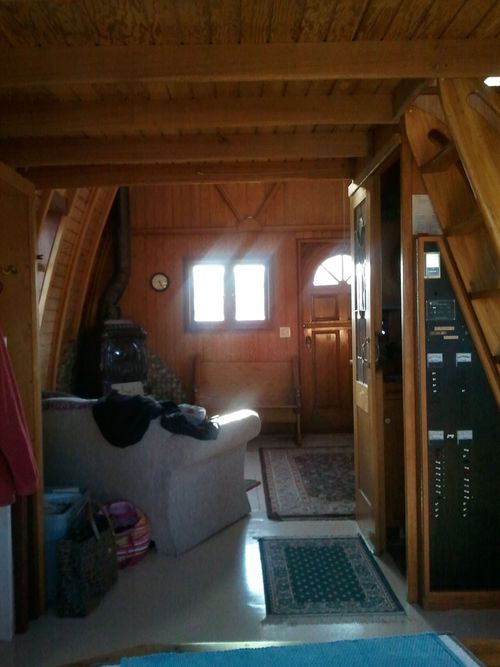 Our host (Rusty's been here before) helped to build the houseboat in 1980, then lived in it while he built his househouse. It is absolutely adorable, full of light from leaded and stained glass windows, and beautiful wood throughout!

It was very hard to leave.

On Saturday, we stopped at China Camp State Park for a clam chowder lunch on our way to Berkeley to and a meet up with Celia! 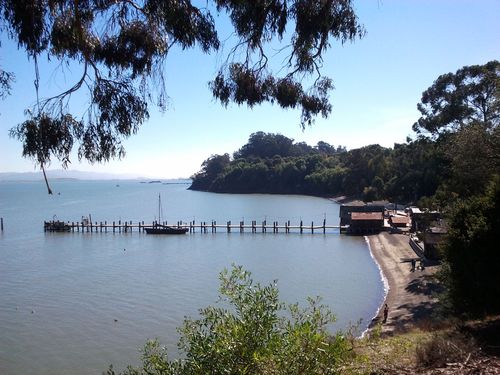 Huey Lewis and the News have been to China Camp, too! This picture hangs just to the left of the open door you can see back there. 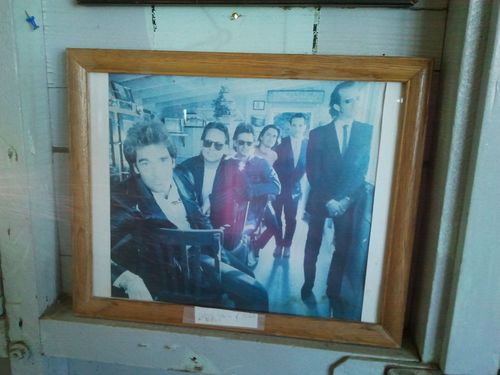 When I turned, I saw myself in this O-L-D cigarette machine on the other side of the doorway. 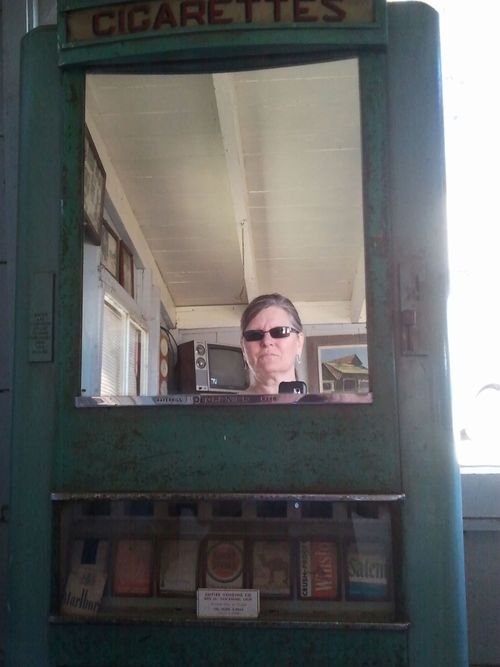 There were photos of John Wayne around the place, too, Blood Alley having been filmed there in the 1950s.

On the way to our main destination in Berkeley, we did a little recon to see if the warehouse that Rusty lived in and managed for his friend Tim in the early '70s was still there... and it was! 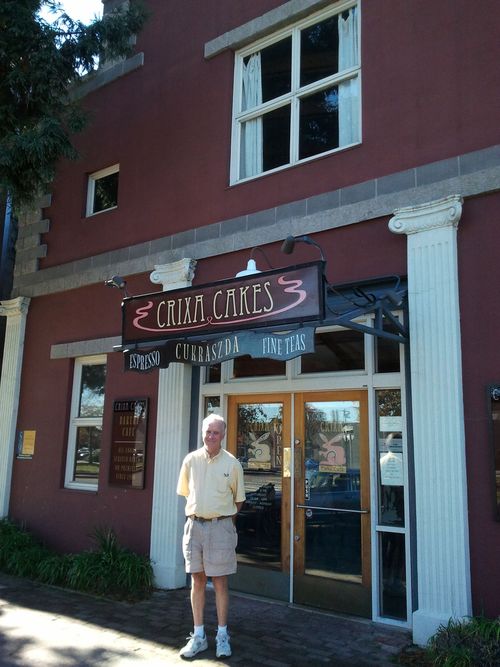 Now home of Crixa Cakes, it's practically across the street from Berkeley Bowl!

We made our way to Lacis and I just don't know what I can possibly say. If ever you find yourself in the area, just go... take your time, and be sure to ask for a tour of the museum. 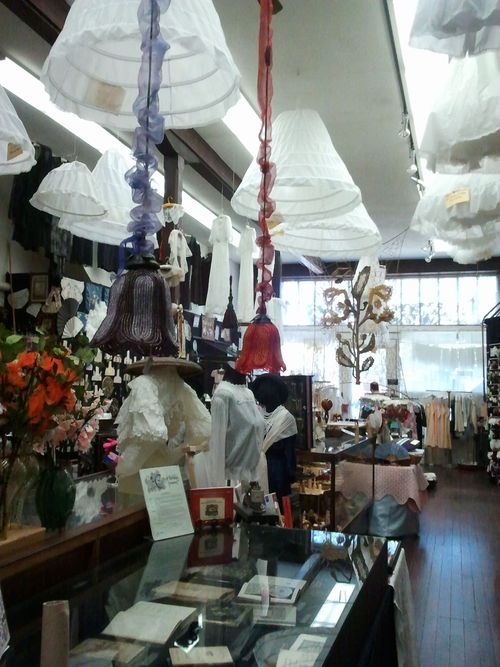 Due to keen interest by all, including some young girls, we were given an extended tour by owner Jules Kliot. You could spend days there (three store fronts + upstairs) and not see it all!

Celia and I also made our way to A Verb for Keeping Warm (keep an eye out for the start of an AVKW Marin). Great shop -- friendly, nice selection of yarn, and also fabric, sewing machines and work space! 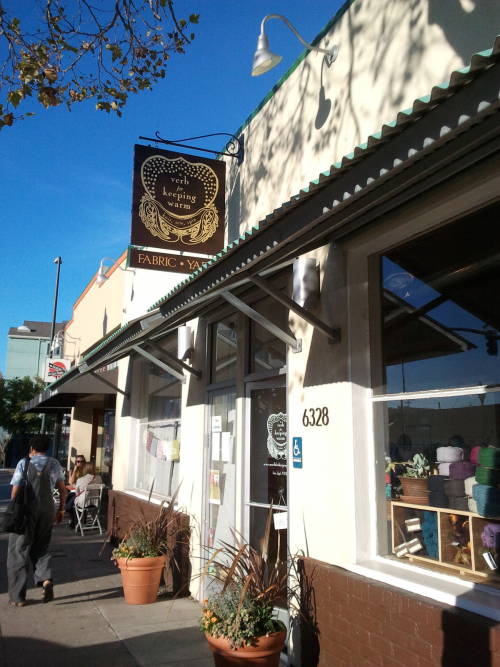 We enjoyed a delicious dinner with Celia, her husband, her brother, and a family friend, followed by a walk to Ici for dessert. 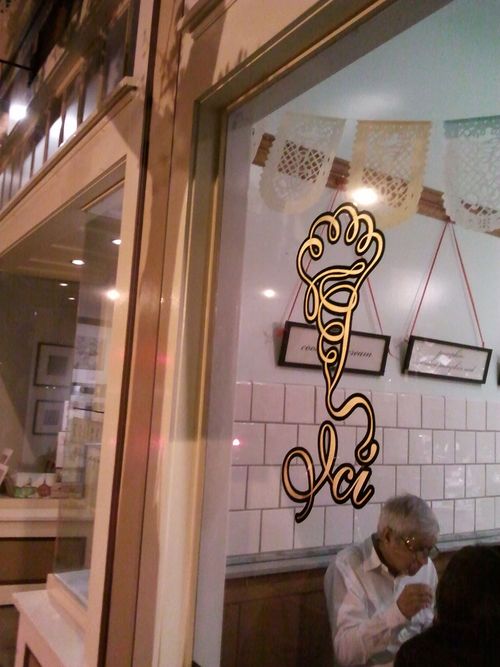 Mmmm, Celia and I had Cranberry Lime Sorbet, I'm pretty sure Rusty had Cookies & Cream.

On Sunday -- the best weather of all the days I was there (and none of them was bad) -- we hit the beach! Specifically, we drove out to Point Reyes National Seashore.

The waves were amazing -- again -- so I let Rusty hang on North Beach while I scouted Drake's Beach, South Beach, and the Chimney Rock area. 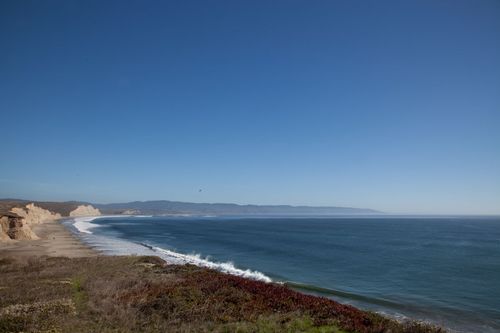 I hiked up to an overlook at Drake's Beach, which you can see above, and later we hiked out on the Chimney Rock Trail just about to the end of the point in the photo below. 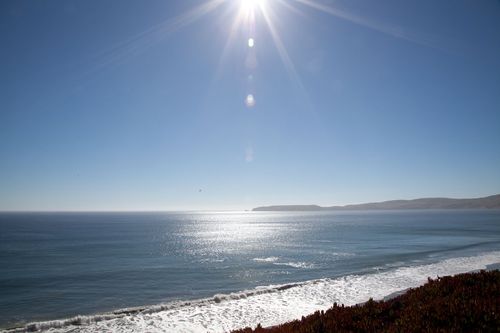 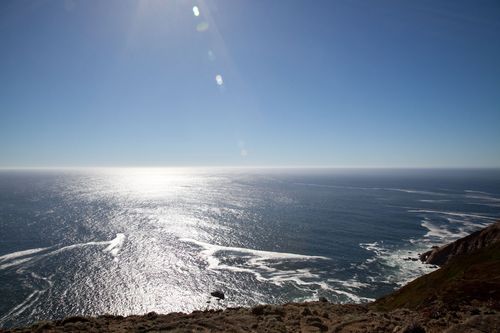 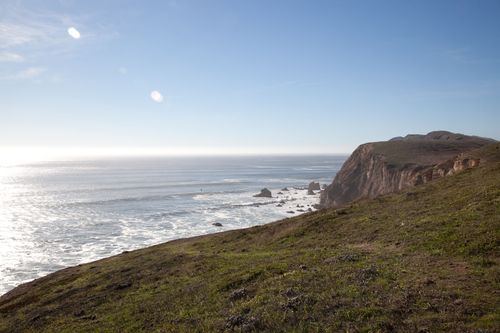 I am reminded of Scotland for some reason... and I must not be the only one because we drove through Inverness on the way here, plus there were a lot of other Scottish place names in use throughout the area. 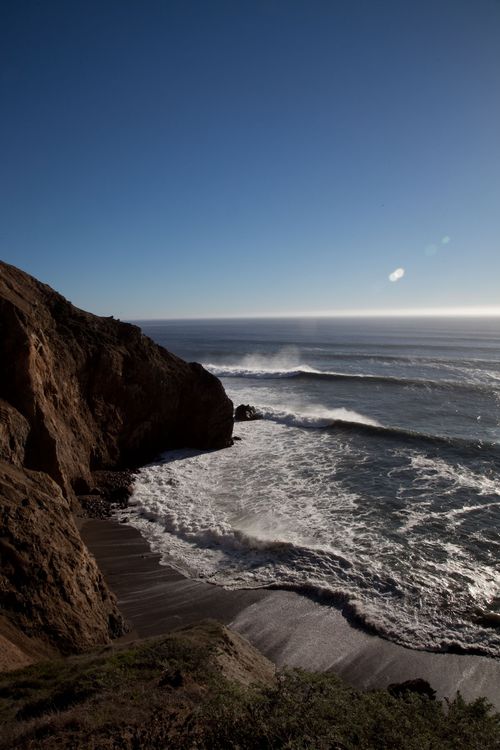 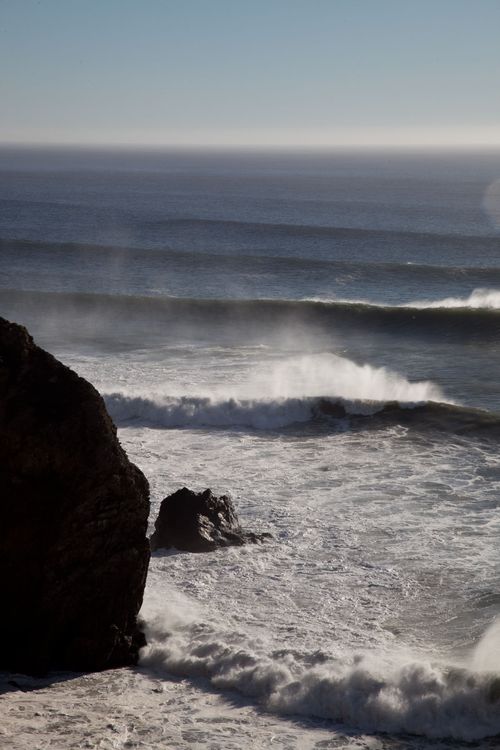 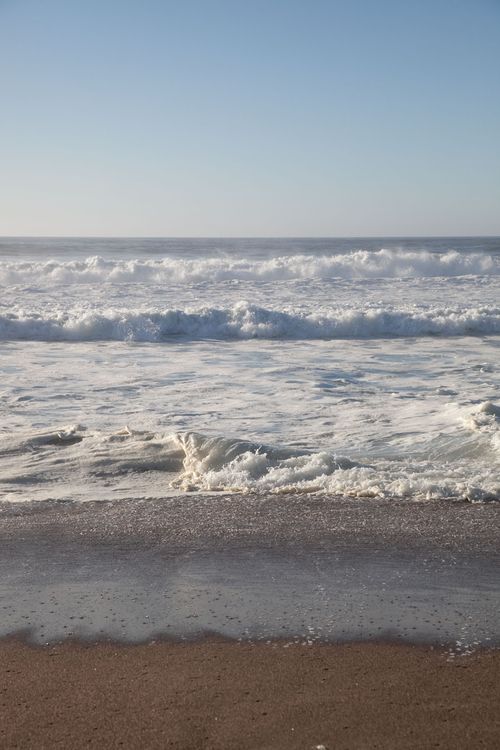 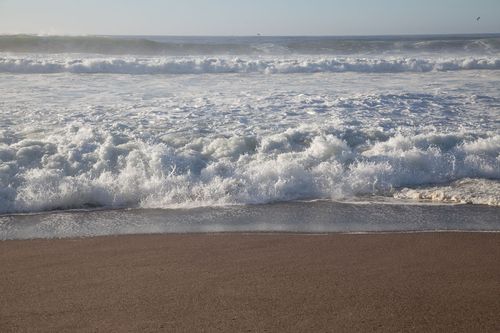 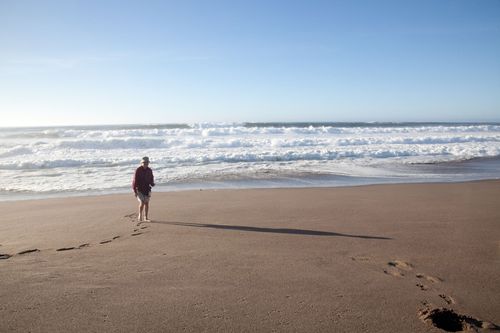 Never enough beach, there was one more quick stop before heading back!

And then it was Monday and a noon-ish flight back home. I managed to squeeze in a stop at Dharma Trading Co. on the way to the airport!

It was a quick trip, but jam packed and a perfect way to use that voucher!

Ahh, the Pacific Coast in all her majesty. I must say, even though I live on the Straits of Juan de Fuca in Washington State, I never tire of our coast. What a grand way for you to celebrate your birthday!

Sounds like it was a fabulous birthday and thanks for redoing the post - it was worth it! That houseboat!

that looks and sounds like a perfect weekend getaway. sunny skies and good food and company (and a bit of yarn and a houseboat??!!) yep... I'm in!

David (my son) was just looking at your pictures and said, "oooh, pretty!" I agree!

What a marvelous way to celebrate your birthday! Thanks for sharing.

Fabulous photos of beautiful places. What I wouldn't give to spend time on that houseboat. What a wise decision on the use of that voucher. What a great birthday overall! Congrats! (sorry you lost your other post!)

Oh, Vicki! What a wonderful Voucher-Trip - and perfect weekend get-away! That houseboat! Those shopping stops! That coastline! Heavenly. I just love San Francisco (and environs). (And, to keep the posting weirdness alive. . . I just lost my entire comment before posting it. You may get two . . . or maybe not.)

It looks and sounds wonderful and I'm so happy for you that you got to enjoy time with Rusty in all these beautiful places. Your photos are gorgeous, thank you for sharing them.

Ahhh, Point Reyes in all it's glory. It's the place where you can pull into a full parking lot and then wander on the beach for hours and not see another soul. A bit of heaven on Earth. Thank you for sharing--brought back great memories from the mid '70s for me.

I'm behind in my reading. This trip sounds rejuevenating and filled with happy times. You certainly crowded in a lot of great side trips. Love the bay area. Safe travels home.

Thank you for taking time to repost your beautiful adventure! Everything about your trip was magical, from the voucher right on down to the places you stayed and food you ate. The beaches are a slice of heaven.

Thanks for re-doing this post. What a wonderful trip!

Sounds like a perfectly wonderful way to spend both a birthday and a travel voucher. We just returned from CA also, but from a bit farther south. And now... snow tomorrow.

Living in Marin, I love to see this area thru the eyes of visitors (especially those who are great photographers). You had fantastic weather that weekend, and certainly took advantage of it.