Ten on Tuesday: 10 Things I Did This Weekend

1. Road trip! Heh. Not across the pond -- that's Isle of Cumbrae, above -- but across the state! The weather was similarly spectacular, though, for our three-day weekend. 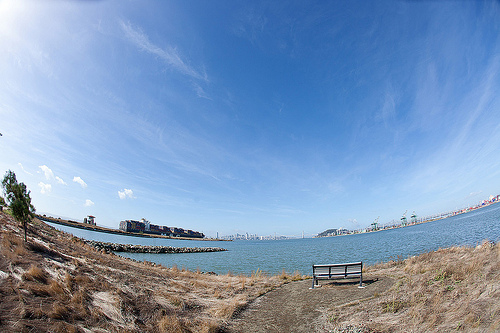 2. The long way. We took "the long way" on way west through our little metropolis -- though not as far west as the Port of Oakland (above)! We drove the newly opened eastern section of Wisconsin Avenue in Appleton -- shut down the last TWO summers for construction -- and significant because that's where my most-local LYS, Iris Fine Yarns, is located. We didn't stop this time, but I've stopped plenty in the last couple of years -- pfft, "Road Closed"? Watch me. 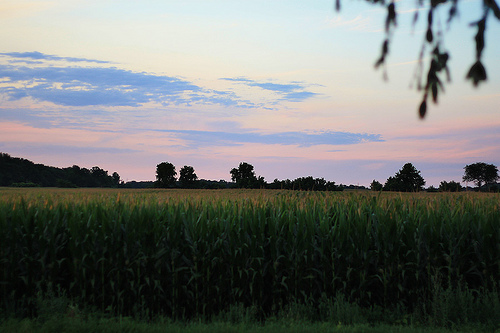 3. Westward-ho. We chose US Route 10 as the departure point for our meandering trip to far northwest Wisconsin. Along the way we checked out a new shop I'd heard about, The Knitting Nest* in Weyauwega. There were two other customers in the store at the time, one of whom I recognized -- she used to work in the children's department at our library! It was funny to run into "neighbors" at a shop so many miles from home.

4. The Kitchen Table. We were close to Marshfield when we started to get hungry, so drove into town to see what we could find. I remembered The Kitchen Table -- and where it was, even though they were closed the first time I tried to go. We had THE BEST LUNCH (he, omelette; me, sandwich) we've had in a long time. Great atmosphere, friendly service, fabulous food -- and I mean real, good food. I meant to buy the cookbook, and I've heard good things, so I'll have to order it.

My mom and dad were both born and raised in Marshfield, so before we left I directed Rusty on a quick drive-by of tour of (my personal) highlights: Grandma & Grandpa's house on Cedar St.; Great Grandma & Grandpa Blum's house on Bakerville; I pointed out some of the important landmarks like the location of Jimmy's Cafe where my mom and dad first met; Weber's and Mitten's; the original Penney's (where my mom once worked, and cried in her Easter Bunny costume because she didn't want to be Easter Bunny! Poor, sad little Easter bunny...); Sacred Heart and the original location of the Marshfield Clinic... I tried to remember where Karau's was (I remember going with Grandma), and to conjure the distinctive (and pleasing) aroma of Grandma's house, and remembered picnics at Wildwood Park with Dad, etc. 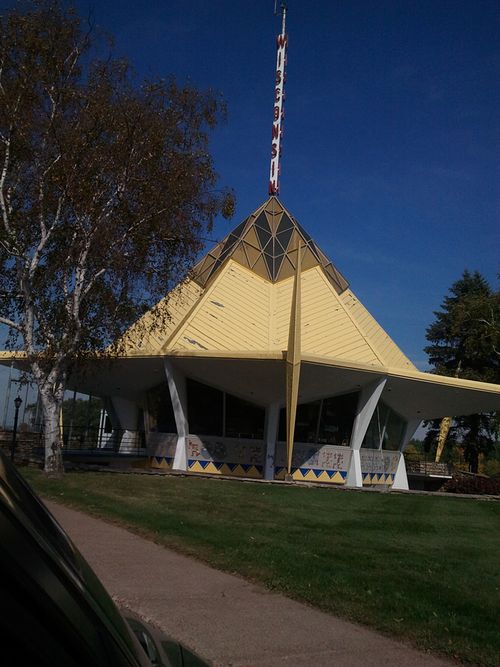 5. 1964 World's Fair Wisconsin Pavilion. Continuing west, we went through Neillsville, and we actually turned around and went back for a better look at this -- it's so fantastical in a 1964 way! Those are NEON letters spelling out WISCONSIN on the spire! 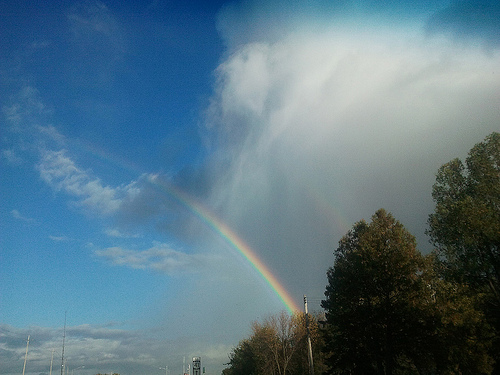 6. Karen's. Our destination on Friday was my sister's house near Rice Lake (about an hour north of Eau Claire). We had a great visit there, watching baseball, knitting, eating, and Rusty helped with a couple of putzy house projects (he's a good craftsman and a great problem solver). 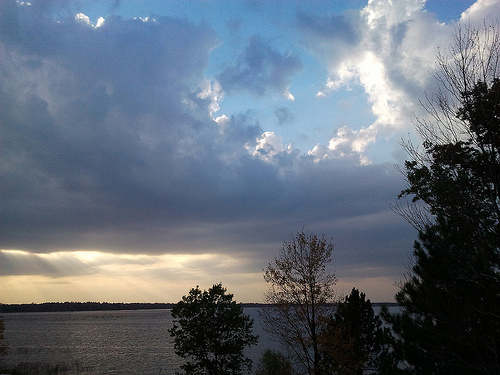 7. Reunion. The main purpose for this trip, and final destination, was Rusty's class reunion of unfathomable years in Grantsburg. He'd never been to one before (not even one of mine, because I only went to the first, which was the fifth, and we hadn't yet met). You are correct if you think he mostly went to school -- and graduated -- in California, but the first semester of senior year was spent at a small-town high school in NW Wisconsin -- and they always invite him to the reunion! He was living with his uncle's family at the time, and had a cousin in the same class -- another cousin ended up marrying a classmate. It was a memorable semester for him as the "new kid." 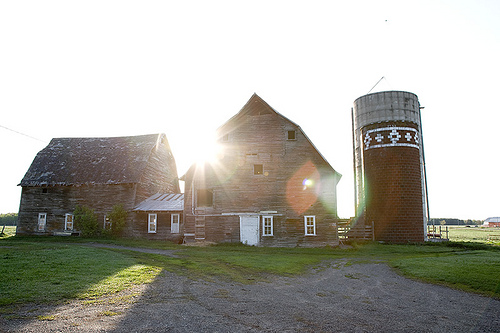 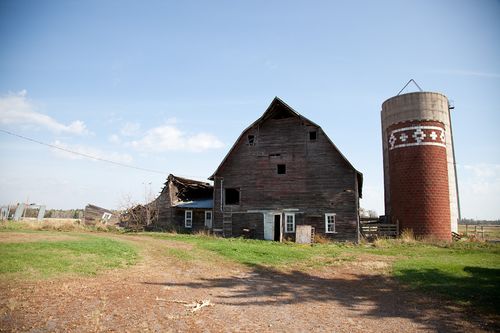 8. The Farm. We visited the farm last May... as you can see, there have been some changes since then. A spring tornado made a big difference in the landscape. The recent death of the farmer's wife makes it that much more mournful. 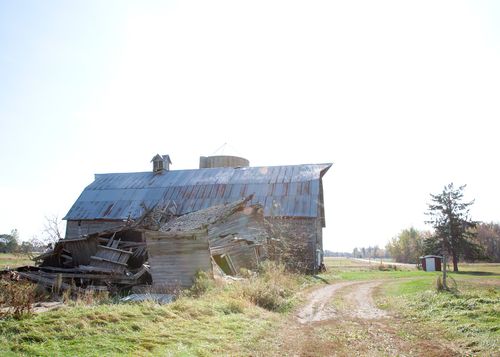 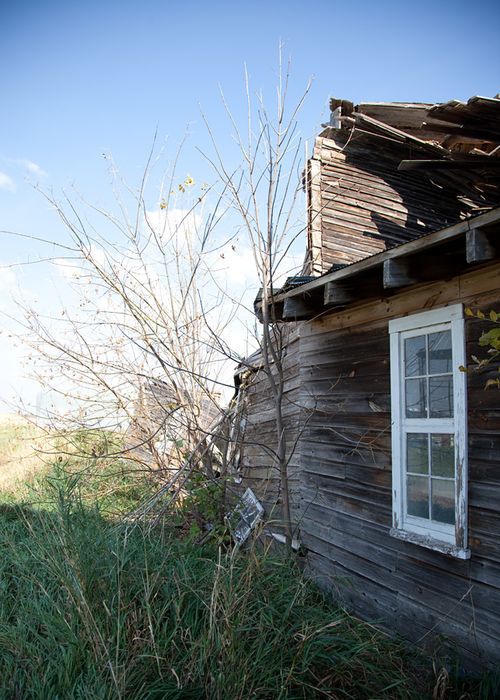 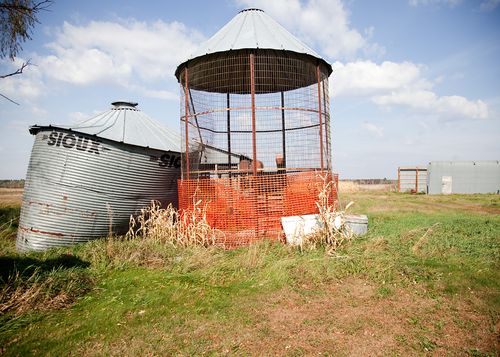 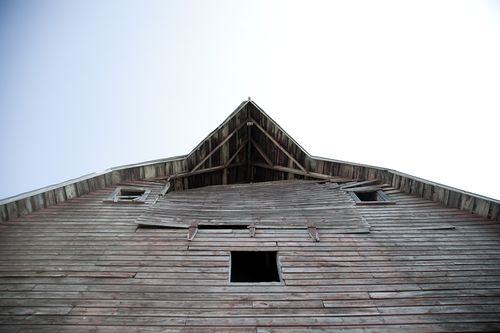 It's all a bit melancholy as the farmer is fading, too. 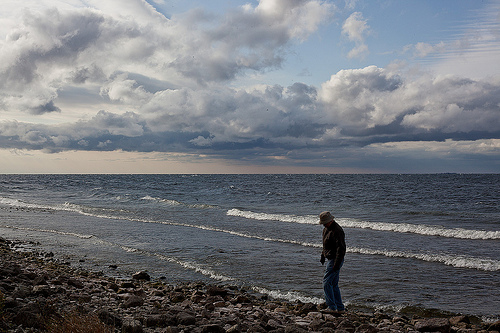 9. Thorpedo. We'd have gone back through Marshfield on the way home to eat again at The Kitchen Table if our timing had been better; instead, we stopped at the Thorpedo Restaurant in Thorp. I remember eating here for the first time, years ago -- the summer before 7th grade -- when I traveled with my glass-blowing aunt and helped with her booth at county fairs in Wisconsin and Minnesota. Good food, friendly service. 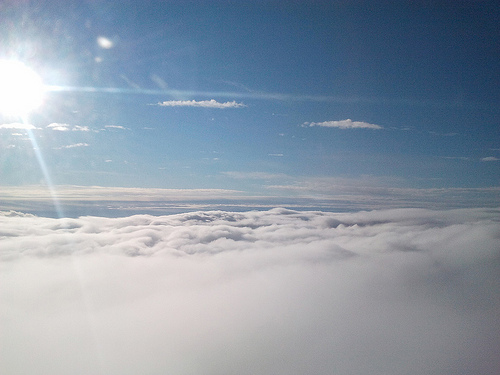 10. Sports Fan! It was another great weekend to be a Wisconsin sports fan, as the Brewers inched their way closer and the Packers came from behind to win! (We actually listened to the baseball game on the radio in the car... rather unheard-of... football, yes; baseball, not really.) *A more photo-heavy post than usual. Some were chosen at random, others with a definite tie-in -- they all have the sky in common. I have been paying even more attention than usual and have been gathering appropriate materials for some interpretation of a sky scarf. Fun, huh? To further the cause, I nabbed a likely hank of Cascade sock yarn in colors of the sky at Knitting Nest. I shall soon devise a plan.

Meanwhile, the Caera Cowl is blocking!

Your post is a wonderful travelogue of your weekend. I love those get-in-the-car-and-go travels best of all!

The American farm is fading and your pictures tell the story. The pavilion looks SO 1960s and I love the "Wisconsin" on top.
You know how much I enjoy your photos, especially of the sky! The last picture reminds me our project is in need of salmons and pinks. I need to go shopping, too!

Love the photos! I see you went through Neillsville - I used to go that way from Marshfield to the Cities ... sad about the farm!

I love your photos, and the crumbling farm buildings do make me sad. But you do live in such a beautiful part of the country and capture it so beautifully!

Sorry, I cannot consider anyplace as far southeast of me as Thorp and Marshfield as northwest Wisconsin ;-)

I lived near the 1064 World's Fair and went there often. Can't say I remember that building but I saw everything at the fair more than once.

Hey Vicki, It was great meeting you and thanks for the link. We've already gotten some website visitors from it. Can't wait to see how the Sky Scarf turns out.