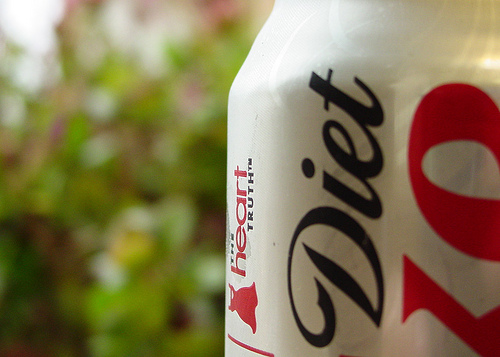 ...for all intents and purposes, I've quit! (Have I mentioned this at all?) I have been a habitual consumer of caramel-colored carbonated soft drinks for as long as I can remember -- it's now probably for more years than I was a smoker -- and I've all but stomped on the can and kicked it to the curb!

This is pretty huge. I really haven't talked about it much because it sort of happened without my really making a decision about it or thinking that I had to "try," and... would it stick? Is this the real thing?

I've drank it all over the years -- Coca-Cola, TAB (that was a hard loss), (I didn't really buy New Coke) (um, I guess most of you didn't, either), Diet Coke and, for the past several years, caffeine-free Diet Coke.

Except for coffee in the morning, milk with most meals, the rare glass of wine or beer and the even more rare glass of water, all I ever drank was Coke. And I drank a lot. Heh. Many a special trip was made to the store over the years because we were out of Diet Coke -- it's the only thing other than milk or half & half for coffee (or cigarettes, back in the day) that would merit such a trip.

So, lately, the past couple-few years, I've been growing more aware of... lots of Things. Food -- where it comes from, how it's grown/produced, prepared/processed. Ingredients. Quality. Flavor. Nutrition. Benefit. Chemicals. Detriment. Exercise. I bought (and rode and raced) my bike. I watched Food, Inc. I read Michael Pollan. I've learned that Food Matters.

I've been striving to do better, to stay on course, to keep it real.

I decided to cut back more on the carbonated beverages -- this started a little while before we left on vacation, so let's say in early March. A few days before departure, my perpetual 12-pack at work ran dry and I decided that I'd wait to replace it 'til we returned; I also forbade myself from "borrowing" from co-workers.

We've been back for over six weeks and I still haven't replaced it. I may have a glass at home in the evening, but ENTIRE DAYS -- a surprising number of them -- have gone by without the bubbly passing my lips. It seems a little UNreal.

Instead, I've been drinking much more water, a little more juice, the occasional smoothie, and a lot more tea (sometimes combined with juice or smoothie). Cordless electric water kettles were everywhere we stayed in the U.K. -- so convenient and easy! I bought one for each of the girls for their birthdays, and also for us.

I feel better -- and I mean that literally. There's something very different about the way my body feels to the touch -- less puffy or something, and like my skin is more attached. It's sort of freaky. I noticed it first when I'd put my hands on my hips (something I do more than I realized) -- they're still plenty soft, but a lot less fluffy. I remember a massage therapist exclaiming many years ago how "spongey" my skin felt to her, and I wonder... Well, I sort of wonder "What the hell?" I know that soda can cause bloating -- but all over? I've noticed the same changes in my face, arms, even my legs. I could also be losing a little bit of weight -- certainly not enough to account for these changes -- but I don't know for sure because my scale was pissing me off a while back (in the way it would or would not work, not because of what it said!) and now it's gone.

Anyway, these past few years have been full of changes -- little changes, big changes, intentional or otherwise -- and it looks like the trend will continue.

Heh, I bought an electric kettle after I returned from London, too. Mine is named "Jeeves." Congrats on kicking the Coke - glad you feel better! (The tea thing is probably also a Brit after effect - mmm, tea!).

hooray! a coke is a treat for me during stressful times. i love the bubbles and the little spicy kick. but otherwise i can be happy with water and coffee. i'm trying to cut back on the half-and-half now.

YIPPPEEEEEE! I can't believe this, but ME TOO. Same deal. I love it how many parallels we have going on....

Good for you, Vicki! I've never been a soda drinker so it's a non issue for me but I know it's hard to quit and you should be really proud of yourself for making this change.

Well chosen drinks of choice. Good for you, listening to your body. Thanks for sharing.

I "quit" the same way years ago, without a decision, and now I don't even like it anymore. I'm sure it's bad 800 ways!

Yay for you!!!! I drank a lot of diet Coke (and used lots of pink/blue packets for iced tea) but stopped maybe 15 or 20 years ago when I realized I was very sensitive to the sweetener (bloating, stomach ache, etc.). I do drink a lot of La Croix water now-- for the bubbles. :D I hope that isn't bad.

We've cut our consumption too... some days I miss it & am happy that it isn't like cigarettes... I can have just 1

Which says something about the power of tobacco!

That's awesome, good for you! I stopped drinking soda in January. I had oral surgery and my dentist told me not to drink any for a week so that the bone would heal. That sort of freaked me out, and after the week was up, I didn't go back. I've had a couple here and there, but it's just not the same, and not worth getting sucked back into. Keep up the good work!

Congrats! I haven't had soda in years and I don't think I'll ever go back. You'll continue to feel amazing, especially now that you're drinking so much more water!

The carbonation can be as bad for you as the sugar/sweetener. It's wonderful to hear you've been able to give it up and feel so much better for it. I have had two electric kettles for years and I love tea (so many different tastes!). Water and tea are my addictions...may you enjoy them, too!

Congrats on kicking the pop habit! We love our cordless electric kettle (it's on the replace immediately list, like the microwave). I make decaf tea concentrate (4-1 qt bags/qt of water), keep it in the fridge, then dilute to taste - makes it really easy.

Congrats! That is really great. My dh is always on my case about how much diet coke or diet pepsi I drink. I need it for the caffeine. I mostly drink one can a day, but he still frowns upon that. A few months ago, we ran out at home and I didn't have time to get some at the store. For a few days, I was suffering from caffeine withdrawal. Nausea and headaches. At that point, it dawned on me that I am addicted to it. I am still trying to do better, one day at a time.

Yay for you! (That was your bones speaking. Apparently that phosphoric acid is a bone-killer.) I have a can of caffeine-free diet Coke roughly every other day. The tough one for me is giving up real Coke, especially since Smokey recently stocked up with a 12-pack. I have decided to allow myself one/week -- can't let it go to waste ;-)