Re-entry
Time out for knitting!

My plane arrived in Oakland late Thursday night.  It wasn't long before I was marveling at the reality of standing in the house of Unraveling!  I've "known" Celia for almost as long as I've been blogging -- 6 years or so -- and we've read/commented/corresponded quite a bit in that time, but until a couple of weeks ago I'd never even heard her voice.  So, yeah, there was some mutual marveling -- "You're right here!"

And it was... marvelous.  It would be a lie to say that my nerves hadn't increased a bit as the time approached -- at the prospect of spending four full days + some change with someone that I'd never spent five minutes with on the phone.  Not so much because she was an "internet" friend, because I've done that before; and I thought I had an accurate reading -- as, obviously, thought Celia about me; and (I feel) I couldn't be more laid-back and go-with-the-flow but, you know, what if there were SOME REALLY WEIRD DIFFERENCES that we never noticed on the internet before??  I've been an "open book" blogger to varying degrees over the years, but I still choose what and how I'll write in my book!  What if we COULDN'T STAND EACH OTHER??

Heh.  Well, it's weird that she has lemon trees in her yard instead of apple, but otherwise, truthfully, the weirdest thing were the many similarities and how often I found myself smiling and nodding in agreement. 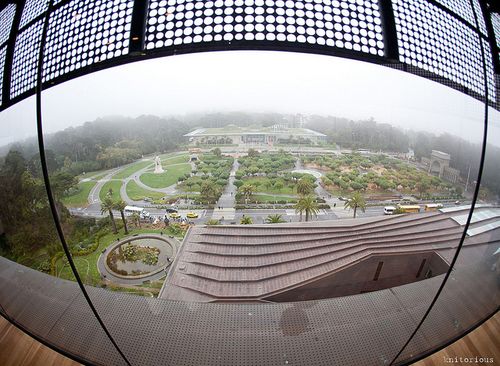 On Friday morning, we picked up our rented lenses at the camera store.  We had three Canon EF lenses (which fit both of our cameras) to play with for the weekend -- a 15mm f/2.8 fisheye (same as I rented in May for Vegas, baby), a 24mm f/1.4 wide angle, and a 100mm f/2.8 macro.  I already knew that I loved the fisheye (above), but I have developed a deep and serious love for the versatile wide angle (below)! 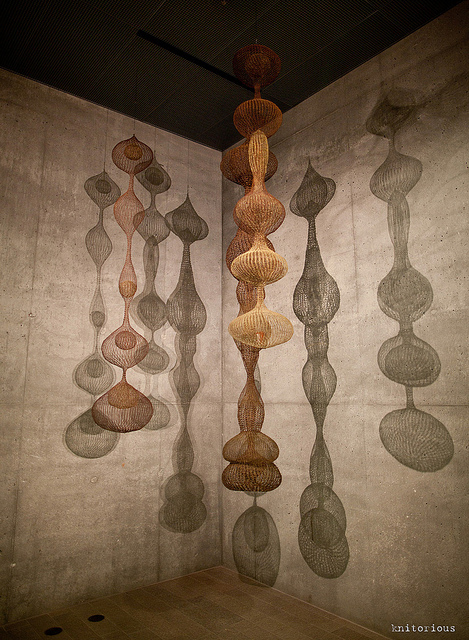 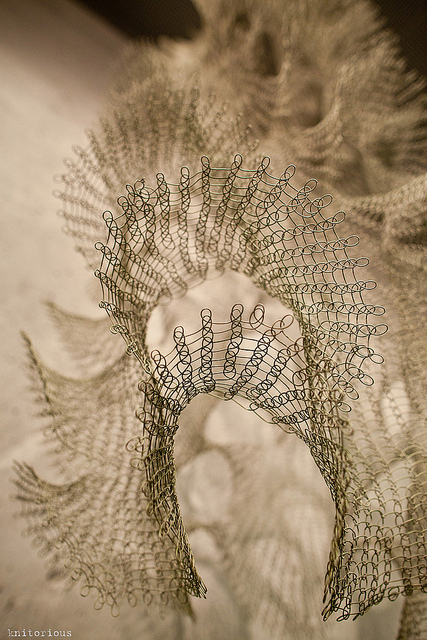 Oh yeah.  Not to mention my love for these Ruth Asawa knitted wire sculptures.  But ahead of myself I am getting...

The weather could have been better for sightseeing but it is what it is!  After picking up our equipment, we took off and drove over some bridges to see what we could see -- the Richmond-San Rafael Bridge, the Golden Gate Bridge, and (later) San Francisco-Oakland Bay Bridge.

We visited the de Young Museum and took photos from the Tower Observation Floor.  It's the California Academy of Sciences (and the Living Roof!) across the way.  I recognized the roof immediately because I'd just sent Ali a "rooftop gardens" slideshow link and this was one; very cool to see it in person. 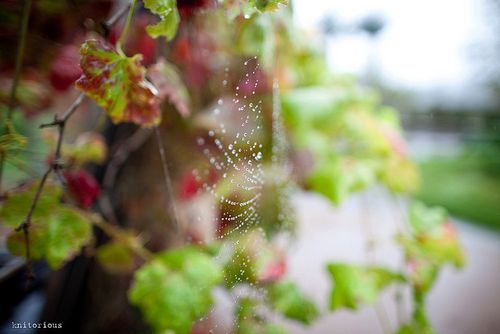 We would have spent a LOT more time on the grounds and in the gardens at de Young if it hadn't started raining in earnest about the time we headed out.  Not to worry... going with the flow... 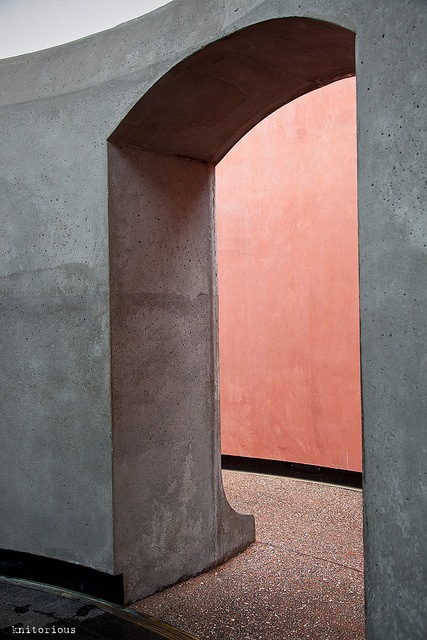 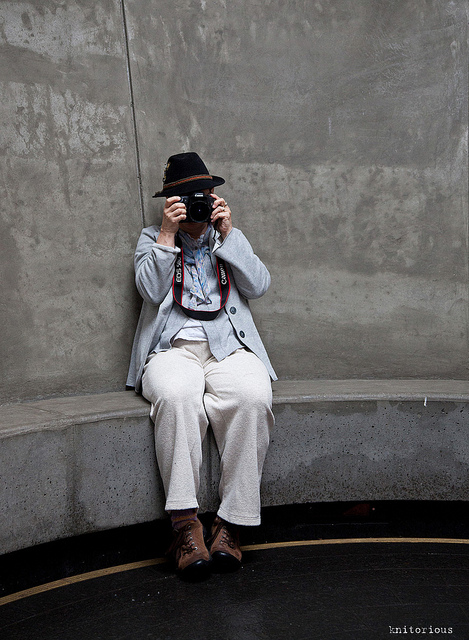 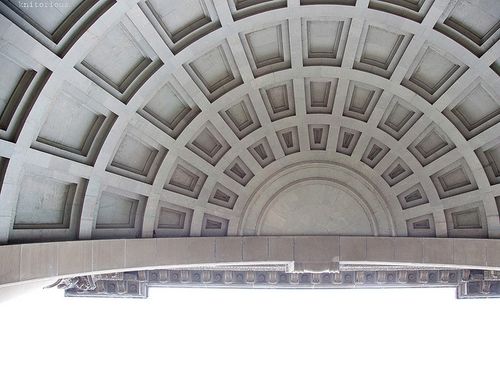 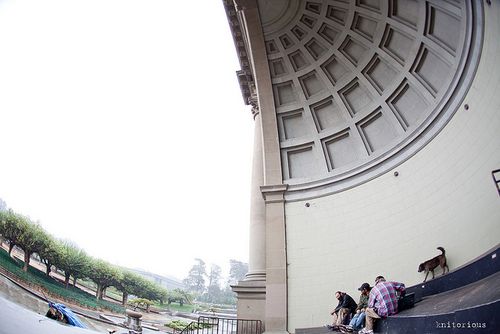 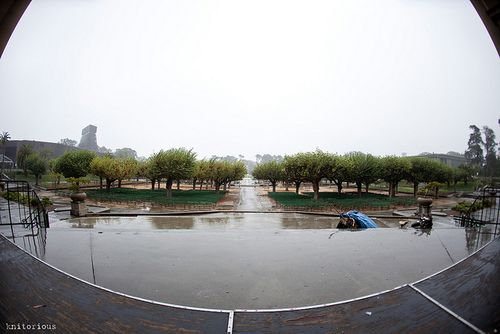 We were also somewhat protected in the bandshell, shared with some bums watching a movie on a laptop and soon joined by another on his bike/trailer mode of transportation (blue tarp above) and the wettest, dirtiest, mangiest dog in the world.

We had lunch -- and especially dessert -- at 'Wichcraft. 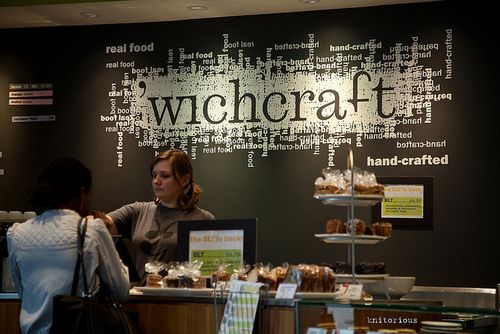 I can scratch #9 - Peanut butter sandwich cookie at 'Wichcraft from Trick or Treat! The Big Sweet SF: 50 Treats to Eat Before You Die", but will have to go back for the other 49. Oh darn!

And from there we made our way to Art Fibers in their wonderful new space! 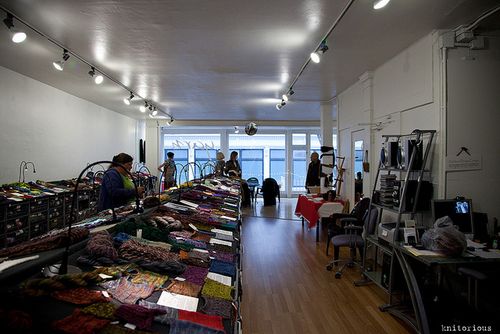 The seasonal lack of green in my world at the moment must have me craving it, as I just bought some bright lime green napkins today with the idea of brightening my winter kitchen. 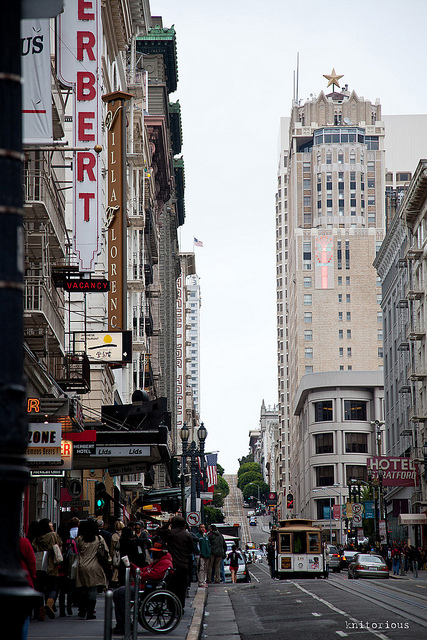 We walked (and drooled) our way through the new Fluevog store on our way to the most enormous DSW I've ever seen!  While I tried on a couple of pairs of Keens at DSW, I didn't buy any -- it wasn't really a shoe-buying trip, but, you know, a store full of Fluevogs, and Keens @ DSW (they're never at mine!).  This is right out the front door of DSW and I just had to take a photo like this.  It is so The Streets of San Francisco to me -- I expect Karl Malden and Michael Douglas to come flying down those hills, sirens blaring. 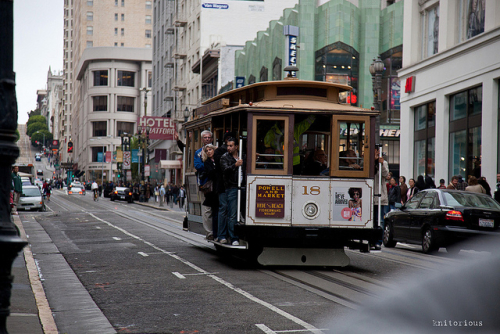 ...which, naturally, makes me think of Rice-A-Roni. 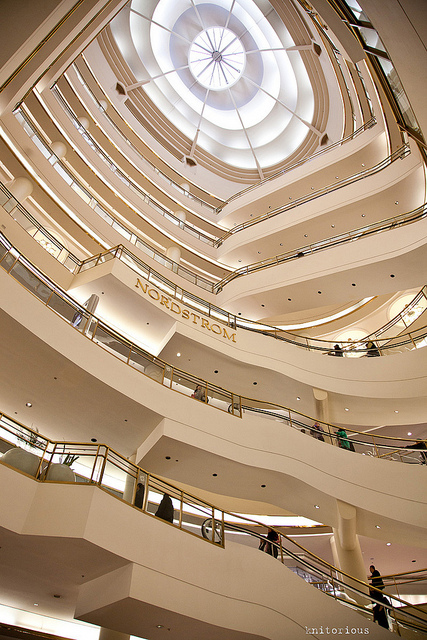 I was slightly enamored of the escalator at Westfield San Francisco Centre, but did not go shopping.

We went home and then to the Berkeley Bowl -- and that's a whole 'nother post!

Fun!
I love the streetcar shot. Rice-a-Roni all right. I love how you remind me of all the childhood jingles. We were TV kids at the same time.
And I'd love to meet you someday - I don't think you'd be weird at all :)

(Somewhat related to your shopping: friend of mine recently told me she thought the foot bed on the Keen shoes weren't as comfortable as the sandals, what do you think?)

How fabulous to visit SF, a favorite city of mine, via Vicki's camera lenses!!

Your photos of the day are fantastic and I feel like I was right there with you guys.

Marvelous photos and trip, Vicki. I am looking forward to the next installment of your adventure. ;D

SF is one of my absolute favorite cities! What fun! I, of course, started in with the Rice-a-Roni (a San Francisco treat!) jingle as soon as I saw your photo! :-)

What a fun time! I've been thinking about renting a lens or two also. What lens do you own that you use the most? Or couldn't live without? I'm hoping to buy a new lens after trying some options but always like to ask other photographers what they use most. Thanks!

I am so glad you are having a fabulous time! What wonderful photos of some of my favorite urban spaces:)

Gorgeous shots! And how brilliant to rent the lenses at your destination rather than needing to schlep them on the plane! My sister and I will have to do that on our next photo expedition.