Weekend quick trip
A couple of "before"

Katie will soon be moving into her first real apartment!  She's lived in an apartment with a roommate before, but it was basically off-campus housing while she was still in school -- a step up (or down, depending on perspective) from living in a dorm.  DH is doing some of the heavier repairs and improvements while Katie cleans and paints, and I'm helping her clean (I've had enough of painting lately, thanks, and I'm very good at cleaning when I want to be).

I have moved into some pretty nice places that were in awful condition in my day -- I'll spare the detailed description of cleaning out the 'fridge at a house we rented in Tillamook that still had food in it when the power had been turned off several months earlier (yeah, go ahead and imagine the worst -- you might be close) -- and this one is ranking right up there.  I try hard to not think and just do -- otherwise, I risk being depressed and paralyzed by the overwhelming, disgusting, greasy, griminess of it all, not to mention the old carpet full of dog hair (I don't even want to think about it) (get the dust masks ready, that's the next thing going out!), the completely disintegrated drip pans on the stove, and (yep, you knew it was coming) the toilet.  I'd rip the toilet out in a second and just replace it, except that it's a wall-mounted toilet and those aren't exactly filling up the aisles at Home Despot, you know?  They're out there, though...

It will be an awesome apartment again one day and Katie is so excited to play and work some magic on the clean slate -- once it's clean -- and all I can say is thank god that the "vision" gene was passed on to the kids!

I have a million things going on and wonder when that'll ever dwindle to a half-mil or so.  Knocked a big one off the list (partially, at least) last night, though, when I finally updated DH's website and added photos of a mural project he did in a client's California home earlier this fall.  He truly has the "vision." 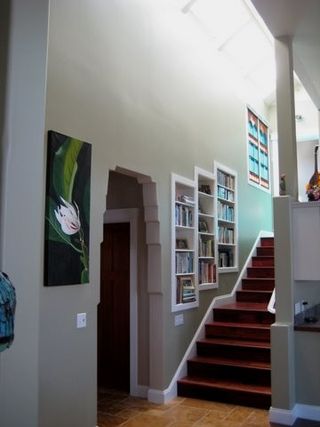 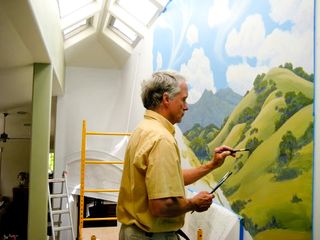 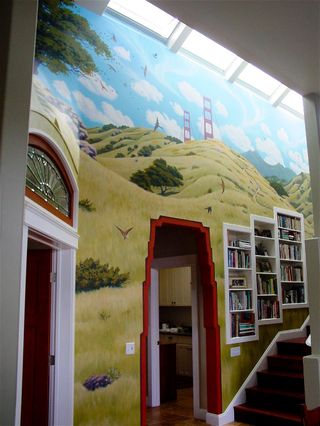 Before, during, after -- sure looks like a cool house!

Happy weekend.  I'll be cleaning some more on Saturday; shooting a Halloween party on Sunday; looking forward to new carpeting on Monday; possibly a big move on Tuesday/Wednesday!

Incredible! I don't know how I missed before that your husband is such a talented artist. The mural is absolutely stunning.

Absolutely Beautiful! Good luck with the cleaning and apartment re-do. It will be gorgeous when you are all finished with it.

The mural is amazing! Your DH is truly talented, in fact, your whole family not only has the vision, but the talent. I admire your ability to just get the job done. May Katie enjoy her new (clean) space.

Wow, your husband is one talented guy!

Happy cleaning and moving to your daughter! And, wow, you are a talented family!

Your husband's mural is spectacular! Between the two of you, I bet your children definitely have the "vision".

Moving into skanky apartments was the absolute worst part of being a young adult. The showers and tubs were the most evil to me, since you can't really avoid using them at some point.

That looks like Marin County! Nice stuff. Busy times. But that's the way life is supposed to be.

Just stumbled on to your blog. The mural. Wow! (And good luck with the cleaning-out. . .)

The mural is so beautiful but I think I love the sketch he sent to the clients before he started the project, even more!

You're a good mom to clean that apartment, Vicki! Thanks for sharing the mural. It's awesome.

Wow you are a busy gal!! A question for your DH, how long did that mural take him?
Just one of those bits of info I am enamoured by...

When cleaning something totally gross (like the toilet) don't forget the old trick of Vicks under the nose. It works beautifully. And those drip pans for the stove...chuck and get new ones...it's worth it and not terribly expensive (I know, it all adds up, but you saved on buying a new toilet...)

Vicki,
What a labor of love to clean the new apartment. I am sure Katie appreciates it. Lovely, breath taking mural. I am truely in awe. Thanks so much for sharing.
I am now in week two of the flat belly diet, and not doing so well. I was doing well, 2 pounds worth, but then a friend going out of town, and a dinner to see her off, wine that I couldn't refuse, and it just crumbled from there. Now back to it, and I have to write everything down! This is harder than I thought it would be. I used to lose it so much easier! (sigh) I will do this, I will! I am so glad that you are seeing results.Keep it up, Jenny

That mural is amazing! What a talented man!

WOW -- I live in Marin (but grew up in Wisconsin)and scrolling down, I recognized the Headlands before the GGBridge appeared. I envy that lucky neighbor w/ such a fantastic mural.