Grilled cheese
I've looked at snow from both sides now

NOTICE:  I have had it with the snow.

Over 7 inches of new snow fell yesterday.  And guess what!?  It's snowing again -- right now -- another inch predicted, but I bet it'll be more.  The 50-year record for snowfall stands at around 74" and this year's total is 71" as of yesterday; by comparison, last year at this time the total snowfall wasn't even 17".  We're running out of places to put it and/or pile it up and we, personally, have already been doing the minimum in some areas, such as only a shovel-wide path on the walk between the house and garage, and the mailman's path from sidewalk to street.  There's a big panel truck for sale in the lot next to mine at work and the snow is piled up all around and just as high now, so that it can't even be seen and, obviously, chances of a sale before spring are pretty much nil.

The Wisconsin primary election is tomorrow and the snow has caused some problems for the presidential candidates, as well.  Kind of disappointing, too.

I finished the Alchemy Monarch project yesterday.  I was surprisingly calm at the finish, considering how little yarn was left when I cast off the last stitch.  It's apparent where the second hank was joined, but not displeasing.  I gave it a soak and pinned it out, perhaps tonight I'll seam it -- with a twist or without is the question. 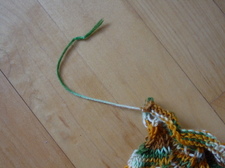 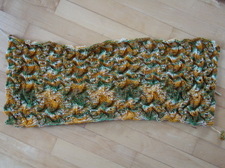 I couldn't figure out what to work on last night.  There's a mistake in one of the Habu pieces, but I didn't feel like fixing it.  There's a wide variety of items in different stages of marination, but I didn't feel like working on any of them, either.  There's the sweater with the truck on it -- the flatbed truck -- that Mack requested, but then I see Maddy's face in my mind's eye... I really need her to just pick a sweater so I can get on with it!

If it snowed here, our mailman's path would be rigged for an avalanche! I love those colors in AM project, talk about JUST enough yarn!

If it snowed here, our mailman's path would be rigged for an avalanche! I love those colors in AM project, talk about JUST enough yarn!

I'm right there with you on the snow-hate. It's too deep for my kiddos to play in- they lose boots and generally flounder about- and the piles next to the driveway are almost 9 feet tall. In the Madison area we've had almost 84 inches this season, and passed our all-time record last week- yikes! What's next to the street all along our front yard is taller than me! Good thing today is a federal holiday- it'll give my husband time to shovel for the mailman.

Can winter be over now? Please?

I feel as if winter hasn't even started here in NYC yet! We've had a total of only a few inches all winter. Send some of that white stuff this way!

I'm with you on the snow thing! It's sickening by now.

I can't believe you weren't totally freaking with that tiny bit of yarn left! Holy Cow!

The last time we had an exceptionally snowy winter, a few years ago, the other thing that we had forgotten about with all the snow problems is the roof. All these people were shoveling their roofs, and we had to do ours, too. We'd never had to do that before. Argh. A couple people lost their lives doing that, by falling off.

Well, we got a lot of snow, then recently some more and some ice and now some rain (but since the snowbanks are all about 10 to 20 feet tall, they aren't going anywhere fast). Last night we awoke to water dripping on dh (again!). And today I shoveled a LOT of heavy wet snow off of the roof, and tried to rake it off the side that was leaking, but it is too high up. I'm getting tired of it too.

This is certainly a time where we are developing our, um, ability to stay sane. The radar showed nothing but it was snowing heavily this morning. If DH hadn't seen the same thing, I would be very worried.

I can't even imagine that much snow. We haven't had a really good snow in several years. Our town would probably shut down completely as they wouldn't know how to handle it. Wow, that was close on your yarn. What are you going to use to make your seams?

Wisconsin has really gotten hit this year. Minneapolis, and even our WI place in n.w. WI, haven't gotten more than a few inches out of those blizzards in the last couple weeks. I feel sorry for y'all in the rest of the state.

I hear ya, still I think I would still take snow over the un-bare-able cold that we have been enduring here in Minnesota this year.

I knew when we moved up to WI that we'd be seeing more snow than we're used to, but I am flabbergasted. This is crazy.

I'm with you!
It's snowing RIGHT NOW as I type this.
The saddest part is we moved in too late in the season to procure a decent snow removal machine - everyone was sold out. And our driveway? LOOONGGG.
Right now it's a sheet of ice (with a dusting of snow on top) after yesterdays melt and re-freeze. We need to have booked a place in the sun to regenerate. Maybe an 'island fiber festival' planned for next year? Heavy on the island, light on the sheep.