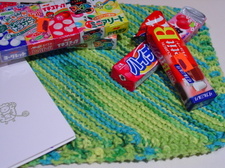 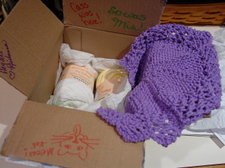 On the left, dishrag and treats from Nishanna -- IN; on the right, dishrag and treats to Gaylen -- OUT!  The Happy Yarn Hags' Dish Rag Tag box arrived at my house on Saturday afternoon... while I was in Madison for the third time in a week!  I'd hoped for delivery on Friday -- I could have had it back out on Saturday morning -- but as it was, this worked out okay all around.  My mail comes very late in the day, so there's no way I'd have been able to do a same-day turn-around on Saturday, and even if I'd taken it to the postal counter at the grocery store yesterday, it still wouldn't have started west 'til today.

So, I came home last night and, fortified with Nishanna's treats, knit a nice, Lacy Round Cloth while watching last week's episode of The Company, finishing just after midnight. 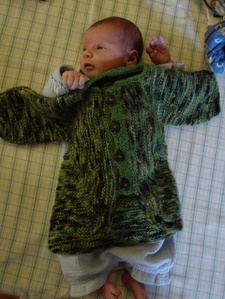 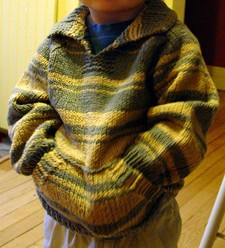 My first BSJ grew a little with the Eucalan soak -- it might even fit Mack -- Addy will definitely be wearin' it next fall.  I finally got Mack to model the Wee Wallaby -- he even wore it on a little outing with his mum (I got to babysit!) -- and it fits perfectly!  I bought some gray and black Mission Falls cotton on sale last week and think I shall do another -- gray with black sleeves/contrast rather than stripes -- and I should have enough yarn for a hooded version. 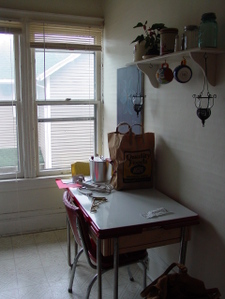 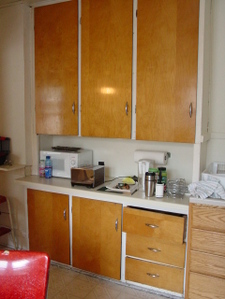 Katie's first apartment.  It didn't really dawn on me 'til Wednesday night -- even after weeks of prep and planning, even after unloading all her stuff from the van and hauling it up and wiggling it through the door -- that when I kissed her and sent her home, she was actually going to her first real home (in-the-making)!  OMG, it's not a dorm and she's not going on an overnight, it's an actual apartment -- where she LIVES. 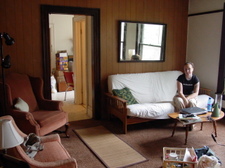 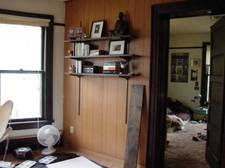 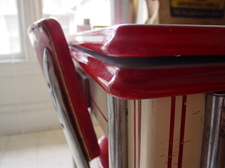 We've spent a lot of time together since Wednesday, for a person who lives in Madison and her mother who lives two hours away.  She asked me yesterday about what causes post-partum depression and I realized a little later that she's probably experiencing a little post-move depression.  Her roommate started to move in, but is actually off on a family thing 'til Tuesday or Wednesday -- even Katie said that her roomie's parents seem to be having a hard time letting go -- work hasn't started yet, school hasn't started yet, there's no social network to speak of yet, no TV yet, not much extra money for stuff...  The big build-up and all that work and then a period of adjustment...  It will all start to come together.  ; )  That's my old, red-trimmed, enamel-topped work table -- I've had a couple of those over the years -- and three old red kitchen chairs that I yanked off the curb a year ago or so right there in Madison!

Anyway, it's really a pretty great apartment -- nice big windows, as you can see, let in lots of light.  It already looks comfy and welcoming.

Wow! Everything looks great! I'm still waiting for my turn at DRT. And what a great Wee Wallaby. It couldn't be more perfect. I almost picked up that pattern last time I was at my LYS.

Katie's apartment is nicer than mine - so no worrying from you. :)

Katie's place is fabulous. It must be very difficult for her to be alone for a few days. Living alone and enjoying it is an acquired tasted, me thinks. I love the Wallaby!

Such a strange feeling. The apartment looks great though.

After one year in the dorm, Meagan has decided that dorm life isn't for her and has a studio in Boston that we will be moving her into in a week or so. She'll be living all alone. I'm not sure it is the best thing for her, actually. But she has become very obstinant when it comes to me, so I really had no input on the matter. I hope she doesn't get too depressed, especially next winter (when she is usually depressed) and let things go. She will be a lot closer than two hours though, and I'll be able to get down there and check on her if I need to. The big question is, will she come home next summer?

Sounds like Katie might be a wee bit homesick. She'll feel better when her roommate moves in and school starts up, I bet.

Re: Tag! see my blog, too! I was doing exactly the same thing you were this weekend, down to the fact that the box should have come Friday, but came in my Saturday (late afternoon) mail!
Except I wasn't moving my daughter; my oldest is at least 6 years away from that. What an adjustment for both of you, mentally, even if they've been gone for school; it's just different somehow with their own apartment. Ah well, we're in this to raise adults rather than to raise children, right?

What a sweet apartment! LOVE that vinyl kitchen chair. And, the new baby is beautiful, Vicki.

Darn it - now I think I'm going to cry...what a great apartment! The sweater sure looks cute on Mac. And Addy - well, he's just precious beyond word.

What a great appartment. How exciting for her.

Looks like you got some nice goodies in your DRT box. Pretty dish rag you are sending.

Love the knitted jacket and wallaby.

Katie's place is darling -- and she has your sense of style, so she'll make it wonderful! Letting go is so hard. I'll tell you about the phone call I got from Abigail early this morning. Heart-rending.

Katie's place is so adorable! Love the BSJ and the Wee Wallaby! The WW looks great on Mack...what a comfy fit! :)

Lovely modeled Wallaby! It's perfect! So is the apartment, I wouldn't mind living there myself! She will get settled, I am sure of it...and so will you!

Did someone mention Rhinebeck? ;-)

I think Katie's apartment looks great. It's hard when they start leaving home. But it's also kind of wonderful, cause it means they are building their lives. Still, it's a change that's fraught with lots of different emotions.

I love the Wee Wallaby. It turned out so perfect. And your new nephew is gorgeous.

You know, kije the dishrag tag thing, I also noticed the in and out of kids. 2 Little ones in 1 big one out. I don't know if I'll survive parenting or not...

Be nice to yourself. Extra nice. A latte, a massage, a pedicure, some yarn....whatever it takes.

Love your dishrag tag post. Very pretty purple you knitted for your pal.

Katies apartment looks great, as does the wallaby, so cute.