Katie and I looked at two apartments yesterday, one next door to the other, both second-floor, 2BR, one inhabited by the male of the species (as far as I could tell, in that there was leg of male visible in his bed -- thank goodness it was only a leg -- his having forgot we were coming -- and assuming that the roommate was also male) and the other by female.

No offense to anyone with a soft spot for the swine -- and remember, it's just a saying, possibly unfounded -- but y'all will know what I'm talking about when I say:  THEY ALL LIVE LIKE PIGS.  Every single item owned by every single one of them had to have been on the floor.

An aside... A little peace offering to soothe the savage, slandered swine -- we spotted one of Onslow's purebred, vintage predecessors in the wild!  Isn't it adorable? 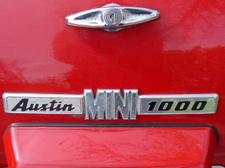 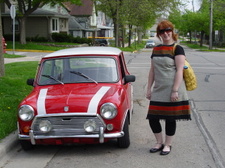 The girl apartment was... did I mention that there was stuff on the floor?  She forgot we were coming, also, and apologized as she let us in, saying that she was moving some stuff around.  Um.hm.yeah.right.  Moving what?  Where?  Here's what I saw: amongst the clothes, boxes, books, clothes, CDs, dishes, clothes, jewelry, cards, clothes, paper, pens, magazines, clothes, mail, newspapers and clothes on the floor, I spotted a few pennies.  Here's what Katie saw: so much change strewn around on the floor, there must have been a couple hundred dollars.  A couple hundred DOLLARS in CHANGE that I COULD NOT SEE because of all the stuff (I mentioned clothes, right?) on the floor. 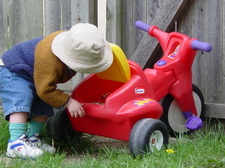 I don't think I had to mention elbow grease at all in that apartment.  It was, by far, the better of the two -- a lot less grunge, roomier, and nothing that a 48-hour laundry marathon wouldn't cure -- and it was the more affordable of the two.  Applications are underway.

Icing on the cake was delivering "Baby A" to Mack -- it fits him perfectly!  He's such a busy boy!  I think his legs are losing the pudge, from getting taller and from constant activity!  He's also talking a blue streak.  He'd spot a neighbor and holler, "Hi 'George.'  How ya doin'?"  He also likes to tell you what he's doing.  He sat in my lap and I put on his shoes; he told his dad, "I'm tying my shoes!"  We held hands a couple of times or he grabbed my wrist and said, "I'm holding you."  (I know...  Awwwww.)

The food and fiber portion of this report will be posted tomorrow.

OMG a feral Mini!! I love him!! love the description of the apartments - fingers crossed!

I hope the girl apartment works out! Mack is so cute.

Kids! I lived alone and with roomies for a few years....never did we act like pigs, not that there is anything wrong with pigs. Can't wait to see the ABCs!!

LOL, there's a big difference between "disorganized" and "dirty." I hope the girl's apt comes through.

Ick! I remember living with roomies in college who were total pigs. One girl never slept in her bed, she slept on the couch in the living room. Her bed was used as a dumping ground for dirty clothes, the contents of her purse and change! I can't believe I slept in the same room as that filthy bed covered in filth! A little elbow grease is usually all it takes. Good luck!

About the apartment shopping ~ I think “oy vey” sums it up rather well. Ugh.

Crossing fingers for the girl apartment and hoping that the food and fiber part of the trip aren't one in the same (as in you had a lot of bran ceral).

I'm glad to hear the only thing that moved in the mess was human. Remember living like that once upon a time and have no idea how I did it.

Dude. That was so me in college. A mess. Not that I'm much better now. I'm definitely not WORSE though. At least I think I'm not. SHUT UP ANN!

Ooooh love the Mini! I hope apt. hunting gets better!

My first roommate after college was disgusting. I am by no means a neat freak; but, you know, basic cleanliness is a nice thing... We were really good friends until we lived together... I hope the apartment situation works out!

OHMYGOD, they FORGOT you were coming? Unreal, and how hideous -- to even see "a leg."!!! I mean, I'm laughing, but honestly -- hideous!