Up for air
Paging through the birthday book

ETA:  It's Cara's fault... she commented on our cuteness and I remembered that I had a picture I was saving for just such an occasion as this (see below)...

ETA II:  To add pattern details about the Rib Warmer.

Unlike Norma, my all-white meal wasn't so on purpose.  I'm really pretty awful at the meal planning most of the time and all I knew at the outset was that I would make scalloped potatoes and ham.  Yeah, well, so that's pretty much all I focused on and it wasn't until I was placing it on the table that I realized I didn't make anything else!  I quickly warmed up some frozen green beans for hubby and the girls, but I'd spotted the neighboring cauliflower in the freezer and that's what I had!  A white meal to go with our white day -- it snowed, at varying rates, almost all day.

One of the secrets to making a good roux and then sauce, I've found, is to have all the ingredients measured, mixed, and ready -- the flour and seasonings combined.  (I did think THAT far ahead, at least.)  The last-minute getting the milk out of the fridge and measuring, WHILE stirring constantly, doesn't work.  The chopped onions were for later, but as long as I was prepping...

*We celebrated a White Wedding over the weekend; one that occurred 22 years ago Saturday in a little beach house on the Oregon coast.  Twenty.two.years.WOW!  How did that happen?  (I wasn't actually wearing white, but it gives me a reason to link to Billy Idol.)  (Thanks for the photo reminder, Cara!) 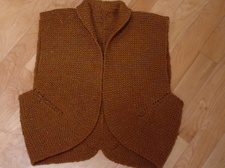 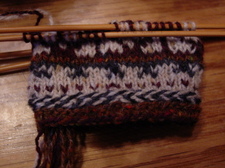 I have another FOO7 -- Elizabeth Zimmermann's Rib Warmer (pattern found in Knitting Workshop and also, I believe, in an available Spun Out) was completed on Saturday night.  It's an amazing -- and amazlingly simple -- thing to knit.  Yeah, amaz-ling-ly.  I started a Latvian mitten swatch; not sure how far I'll go with it.  My knitting with colors has definitely improved since the last time I tried this at home.  I flubbed up on the braid -- not sure what happened, but it's not quite right on the left half of that photo; you see where it changes in the middle from "arrows" to just purl bumps.  I'll be using different yarn for the real thing -- a tiny bit heavier, less tweedy, smoother, still undecided.  I have enough Baby Ull, but I'm not sure of the colors on-hand.

Also, yesterday, I knit the collar on Coup d'Etat; the sewing up comes next.

Happy Anniversary! You and Rusty are the cutest! I was thinking and talking about you this weekend - my grandmother gave me her buttons! YAY! I just have to go through them all now. Should be completely fantastic. AND she gave them to me in a big coffee can. THE ONLY way, no?

Ooooh, happy anniversary! And I love scalloped potatoes. I couldn't agree more about making a white sauce - I premeasure everything so it's all ready to dump in when I need it. I learned to make a white sauce nearly 30 years ago - my mom thought it was essential that I learn this at a very young age.

Happy Anniversary!! Ours is on Thursday!
Love your rib warmer! I made a couple a few years ago and had so much fun making and wearing them.

Happy anniversary!
Did I miss a rib warmer post? Where is that pattern from? I love it.

Yum for white sauce. Congratulations on your anniversary!

There's the cuteness I know and LOVE! KISS!

Happy Anniversary!
Love the Rib Warmer and wonder where the pattern is located. I will Google it first and hope for the best! I am on a garter stitch kick at the moment!

Happy Anniversary! I like cauliflower but my husband can't stand it. He says it tastes like nothing, which I find interesting... In any case, you rib warmer looks rib warmingly good. It makes me feel cozy just looking at it! EZ would be proud.

Happy A! Hit 25 in December ourselves - I just don't feel old enough to have been married that long - but he is, lol. Have you tried mashed cauliflower??? Yummm, with just a scrape or two for whole nutmeg, a little cream to moisten, and of course, butter.

Thanks for the link to the pattern book. I went to Schoolhouse Press and ordered the pattern for $1.00 - while there I ordered a few other pamphlets of EZ's patterns. I like Sally Melville's patterns, and some of hers are very much along the line of EZ's patterns.
Thanks, Vicki, I really appreciate this. I will let you know when I knit my Rib Warmer!

I agree with Cara, you two are too cute! Many congratulations on your longevity as a couple. And I hope you're just as stunned when you find you've been together for fifty years.

Regarding prep for cooking, Mr. Celia insisted we buy eight little metal bowls for ingredients, which he faithfully uses much more often than I do. He's much better at lots of dishes than I am. And cauliflower? YUM! We're having some tonight.

Also, I may have to copy you and make the ribwarmer. I've got the perfect yarn for it, and I'm sending away for the EZ book NOW (it also has the Baby Surprise Jacket, which I would like to make for the impending nephew).

Happy 25th! And what a darling photo...Love the Rib Warmer - it's on my list for some day...when all the mandatory knitting is completed!

Happy Anniversary, Vick,i to you and your hubby! Congrats on it being the 22nd. Quite an accomplishment! The Rib Warmer looks great. I love the color. Your snow photo is lovely--very interesting "terrain." What does your Birthday Book say for November 8, my birthday? ;-)

Congratulations! 22 years is pretty amazing in this day and age.

Many blessings and congratulations to you on your anniversary! Wasn’t the snow great? The rib warmer looks fantastic.

That rib warmer is truly wonderful. I have some yarn that I purchased at Knitting Camp years ago, just for the ribwarmer. I will have to get it out. Congrats on 22 years together. 22 is a very nice symetrical number!

Happy anniversary, if a little late ;-)
You are only 20 years ahead of me 8-) Nathan and I didn't really do a date - dating isn't big out here. We just hung out together.