You may have been following the saga of Marge and Janice elsewhere, but I've got the scoop -- and the real thing!

It's my mom's birthday today!  Her name was Marge when I was growing up and Margie before I knew her, but it's been MARJ for quite a while now.  She didn't like the way her mom spelled her given name, so adopted a new and improved spelling on her own sometime in grade school (and has obviously played around a little with the short version, as well).  It wasn't until 1974, when she was a full-time college student in addition to mother of five, and in need of a passport for a trip to Russia that it caught up with her and she had to have her given name legally changed.  Her birthday is the last day (endings) of the first month (beginnings), which, of course, is where JANUS comes in.

Are you with me?

Among her birthday presents, Marj learned that she will be a grandma again -- and Mack will be a sibling and I will be an aunt again!!  It's the most exciting news we've heard 'round these parts in quite some time.  The baby is due in August -- on my dad's birthday, no less -- and that's pretty freaky-cool, too.

We -- Mom, Katie and I -- went out for birthday lunch today at a great, new Italian restaurant, and were joined by my brother Michael and his best friend Paul.  We got to know Paul a lot better last year, under circumstances we hope never to experience again, but we just don't see him as much now, so it was extra-nice.

Mike and his wife are going to Milwaukee at the end of next month to see the Red Hot Chili Peppers in concert.  Mike's a huge fan and also a bass player -- he refers to his playing these days as "rehab" -- and Flea is the standard to which he aspires.  He used to play out in a band, with Paul and Paul's brother, and they had an impromptu get-together last night to see how it would go.  (It went fine -- they were rusty, but it was good.)  Anyway, the Red Hot Chili Peppers concert is on the anniversary of Michael's accident and it seemed like a really good way to celebrate... well, to celebrate life -- that Michael is alive and able to go to a concert by his favorite band!  Music has always meant so much to him, and this is pretty cool.  I'm working on ideas for something special from his sisters to make it an even more memorable night for them. 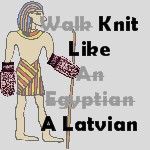 It's been -- what, a month or so? -- and I still end up humming Walk Like An Egyptian every time I try to think of a name for my Latvian Mitten Knit-along/Get-together.  Not only that, but Aerosmith's Walk This Way and King Tut, by Steve Martin and The Toot Uncommons, and have also elbowed into my brain.  I just can't shake it.  So, there you have it, the Knit Like A Latvian knit-along button -- the banner even references the soundtrack.  Has there been a knit-along with a soundtrack before?  ; )  The astute among you might notice that the Egyptian mascot is wearing my North Star Mittens, which are decidedly Scandinavian, but they do have a Latvian braid as they were a long-ago "warm up" project for the Latvian project that's set to commence.  I had to use what I had on hand, you know?

Hooray for a new baby in the family! Love the button, too.

Happy Birthday Marj!!! See, though, this just proves that I should be Janice, not Ann. I was born in January! (Oh crap. So was she. But I was born on the FIRST!)

YAY for babies! YAY for AUNTS!

Has it really been a year since we were all praying for Michael's recovery? So glad to hear he's enjoying his 'therapy'. :-)

Congrats on the new nephew/niece!!

Happy Birthday to Marj and new baby news is such exciting news for a birthday, too! New-auntie news is pretty cool, too. :-) I don't even knit with more than one color yet and I'm humming that tune.....argh! *g*

Congratulations on the newest member of the family. I wonder what you'll be knitting for the baby?

Congrats on the new family member! My birthday is in Aug too. Good time of year for a kid to have a birthday:) Love your banner and buttons for the KAL, you're going a ll techi on us. Nice that your family is getting some joy pumped into it yay you guys! x

Love the chili peppers. Congrats to Grandma on birthday and new baby. How wonderful!!

So much good news! You must have the best KAL button and banner around...not to mention the name of it! Good going! LOL

Oh there can never be enough good news around, congratulations on having another baby to knit for.

As soon as I have a computer again, I'll be saving the button. :)

Born in Arizona, moved to Babylonia.... (yep, I'm singing it in my head and it's all your fault!)

Another baby for Auntie V to knit for! And birthday cake! Woot!

Ha! I love that button!

Congratulations on the new baby news too!