Surprised by the North Star 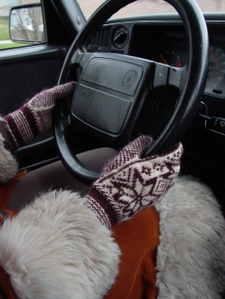 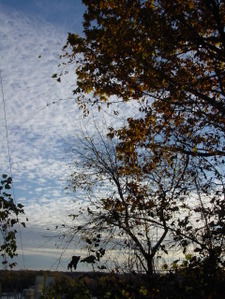 I'm a pretty laid-back passenger, not much of a back seat driver.  It was (and will be) me who drove around with the girls when they had their learner's permits.  I didn't get too flustered when Katie hit the gas instead of the brake and got really, really close to the house.  I didn't have a fit when Ali hit the gas instead of the brake and made a big dent in the garage door.  I calmly explained the intricacies of the Y-turn as we climbed out of the ditch.  I have been known to grab a handle, put my hand on the dash, draw a sharp breath.

Last night, Katie was at the wheel.  She was down-shifting, slowing to stop at an intersection, when I drew a sharp breath.

"YOU'RE WEARING MY MITTENS!!"  Smiling ear-to-ear, getting out the camera -- it was like running into a really, really good friend after a long time apart.

She had to take them off after a while -- it was cold, but not North Star cold -- I tried them on, admired my work.  Oh yeah, they're a little short for me.  I recalled one of my many "learning opportunities" with these mittens.  Stephanie's advice to "block some sense into the thing" always makes me smile.  Oh, man, I love these mittens!

My sky is very pretty to the east this morning.  The soundtrack is Canada geese.  This morning, we'll be buttoning up the house -- putting away air conditioners, replacing screens with storm windows (ick, that means washing windows, too).  The furnace has been on for a little while now.

"north star cold". I love that! I can even feel the chill. Wait. That's the coldness of my house and my hands wishing they were in a pair of mittens THAT good looking!
6 more days.

I'm not ready for cold. I want to be, but I'm not. Nice mittens.

It looks like Santa Claus is driving the car. ;-)

Great, great mitts!!! I've been thinking of making this a Mitten Christmas. But, will my 15 year old wear mittens I make, that is the question!!!! Glad your 20 year old is wearing them

Not only are those fabulous mittens...but THAT COAT! I LOVE IT! What a great mama you are! :)

Love the action shot of knits caught in the wild. ;-)

what a gorgeous seasonal post - love the mittens, and the chilly sky.

beautiful mittens! The prelude to them made me laugh (out loud). argh... storm windows... after buying our house we found out that there were no storm windows to replace the screens. So many things make me feel like a silly first time home buyer. theres always the next house!