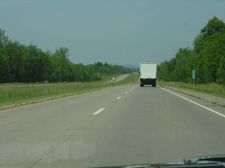 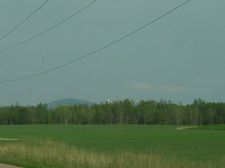 If you click on the picture on the left and look to the left of the white truck, you will see a dark shape on the horizon, also known as Rib Mountain.  (Never mind what Wikipedia says, I've never heard it referred to as "Rib Hill," though they also do say that it's technically not a mountain.  You already knew that, though, and so did you and you.  Y'all can stop laughing at my mountain now.)  It's in Wausau and it marks the half-way point to my sister's -- it's actually about two hours from my house and two-and-a-little more from hers, but oh well.  We have met there a few times to get or give back kid combos after extended visits.  It's a good place to stop for lunch or a snack or, these days, a potty break.  When the kids were little, I used to hate stopping and I'd drive straight through the whole way if I could -- one or all would usually nap and, well, it's just easier to travel that far with napping little ones than not.  My bladder was a lot stronger then, too.  Nowadays, it's more a matter of will I make it that far before I have to stop, and will it be the only necessary stop?

There is hella road construction through Wausau right now, but it is badly needed and long, long overdue.  When I first began making this drive -- years before my sister ever moved up there -- Hwy. 45 to 29 to 53 -- it was two lanes almost the whole way.  I've driven and watched every summer as nearly all of it has been converted to freeway and bypasses.  I really kind of miss going through some of the small towns -- Wittenberg, Abbotsford, even Hatley (don't blink) -- but going around rather than through Rothschild and Schofield easily shaved 15 minutes off my time and when you're looking at a four-hour (give or take a little) trip, that's a lot. 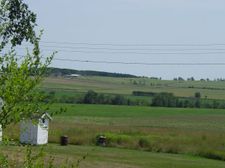 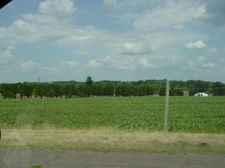 In case you were wondering, this is the boonies.  (I know, I know... where do I think -I- live!)  My cell phone doesn't work there and dial-up is the norm.  It sure is pretty, though, and very relaxing.

I've been riffing on my Log Cabin Blues... with a good measure of pink... and green and yellow, too... y'know, it's all that jazz.  I'll have something worth showing tomorrow.