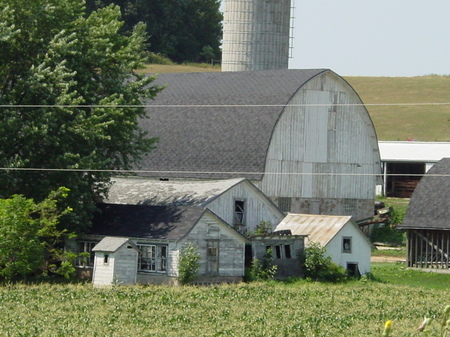 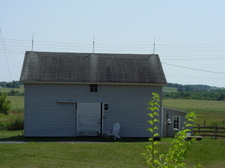 I have lived most of my life in America's Dairyland.  I can get you to a farm in almost any direction from my house in about five minutes.  Last week, from our back yard and with the wind "just right," we could detect "fertilizer" being spread on a farm somewhere -- it smelled like it was right next door!  There's even a small, working farm right across the road from where I work -- a hold-out from encroaching development -- and I often see cows in a little pasture there.

I've never lived on a farm.  My Grandma B grew up on a farm -- her dad gave up the railroad business when she was three and moved his young family from Iowa to a farm in central Wisconsin.  Grandpa B never lived on a farm, either, but his dad sure did.  Grandma K was also raised on a central Wisconsin farm; she and Grandpa even tried their hand at farming for a very short time after they were married.

The only "close" relation I knew who actually lived on a farm was Grandma K's youngest sister and her husband -- Great Uncle Al & Aunt Loretta.  Loretta was much younger than Grandma -- young enough to be the flower girl at Grandma's wedding -- so some of her kids are not much older than me, and some are even younger.  It was always a special treat when we'd stop by Al & Loretta's farm on our way home from visiting my mom's sisters.  As a little girl, I wasn't interested in outbuildings, but I did learn all about electric fences, bulls, barn kitties, and cow pies.  Once you step in a fresh cow pie, you'll never do it again. 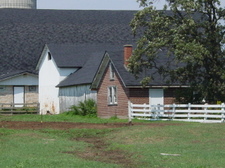 It's a weird word, too -- outbuildings.  I was introduced to "outbuildings" (the noun) years ago when I set type (that's lingo -- it was actually done by computer, at a keyboard) for real estate and farm auction ads for the paper.  It was only after learning what they were called that I actually began to notice outbuildings, even though I'd seen them almost every day of my life.  They're everywhere!  Some farms have only a few, some have a half-dozen or more.  Sometimes they're all spread out or neatly arranged, other times they're willy-nilly or little tacked-in additions to each other.  Some are big, some are small, some are well cared for, others quite neglected or downright dilapidated.  They are machine sheds, pump houses, summer kitchens, outhouses, chicken coops and pig pens and stables.  I suppose it's a fascination with romantic country living, an appreciation for history and architecture -- and curiosity about function -- that keeps me looking.

What a great O! I've never really given outbuildings much thought but I see them all the time, too. You can bet I'll notice them even more now.

Very creative! I love outbuildings, too. They are so photogenic.

I love your pictures! I really enjoy farm scenery having always had some romantic notion that it might be nice to live in the country, perhaps even on a farm.

This brings back so many happy memories of my grandparents farm. We would visit every summer, in June to pick strawberries and September to help in the orchard. Pop had acres in corn too but we didn't help with that. He had a huge barn (that I was afraid to venture into) and corn cribs, the outhouse, and his workshop. He was a carpenter by trade. He made some beautiful clocks and cabinets and people still talk about the beautiful floors he laid. Thanks Vicki for stirring up these wonderful times in my life.

You usually only touch an electric fence once...even with a corn stalk!

I just went to look at a country property with 3 lovely old stone outbuildings. Too expensive to fix up though. Sigh.

OOOOOO I love your O!

I love out-buildings! We have a couple but could always use some more. The trick is adding them without it looking like a shantytown.

Outstanding! heh. I love them especially when they are ramshackle.
:)

What my husband wouldn't give to get him some outbuildings. There would be one for tools, one for motorcycles, one for the trailer.....Maybe it's a good thing we don't have any it prevents him from adding to his collection of stuff. (although if I could get one for the crafts....)

Anyway, I was a farm grandchild and have fantastic memories as a child of pretending all those oddly placed mishmashed buildings was actually our very own city - grocery store and all.
Great pictures by the way!

There are times I really miss the outbuildings at the farm - the milk barn, the milk house, the brooder house, the chicken house... the big big barn... I keep thinking sheds are the suburban folks outbuilding - and how almost every yard has to have a shed.

An excellent "o"! I loved all the photographs, and have a thing for barns too, although the ones way out west look a lot different.