Oh my goodness, there's so much that's "moo."

If you have not already, please go read about Christine's trip to deliver the "Comforting Jef" blue afghan, made with donated squares from knitters all over, to her brother Jef.  I am honored to have participated in this project, to have helped Christine make her vision into a real blanket, to have helped her with the comfort of Jef.  As you may know, my brother Michael will soon be the recipient of a second blanket and I suppose I'll be writing my own "No words can describe" post.  (Me: Verklempter all the time.)

In a similar vein -- and, in fact, partly inspired by "Comforting Jef" -- is Cynthia's Warming Grace project.  Initially begun in hopes of collecting enough pink squares to make a blanket for her young niece who is battling leukemia and perhaps enough for a second blanket, the project has grown and will now be ongoing, accepting squares in any color, to make blankets for both boys and girls in the oncology wing at Alberta Children's Hospital.  I lost a favorite, lanky, be-dimpled cousin to leukemia a few years ago -- totally curable if he'd had it as a child rather than an adult -- I'll be knitting some blue squares, to send along with the pink, in his memory.  There are some very generous, donated prizes for participants -- but be aware, if you're interested in entering, that the deadline is looming.

And another contest at Kat's, for which my own entry immediately follows:

Name five places, other than your house or a knitting store, where you have knit:

1.  At the lake.
2.  At the library.
3.  On an airplane.
4.  In the car.
5.  In the waiting area of my local Saturn dealership (knitting and dreaming about the new Sky roadster) where I was once joined by an elderly gentleman crocheting a baby blanket.

The deadline for Kat's contest is Friday, I believe, and while I'm not sure my places are all that original, originality does count.  There are others ahem*Celia*ahem who have knit in far more interesting locations -- I can't beat knitting on The Great Wall!  But go read 'em all, they're fun!

A bunch of packages arrived from the U.K. yesterday -- mostly heavy books that Katie sent home for cheap on the slow boat -- but also this one from British Breed Yarns!  (Thanks for the tip Anna!)  I want so badly to open it, knowing that some of it is mine... 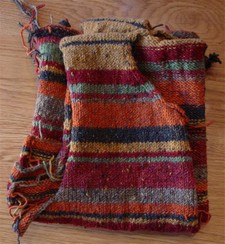 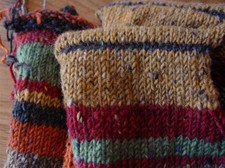 I didn't make much weekend progress on Fib, but here are up-to-the-minute pictures -- snapped on the kitchen table this morning and I'm shocked at how fabulously true the colors are -- the light green stripe is a little brighter in person, but the rest are darn good (morning sun and a chandelier with run-of-the-mill incandescent bulbs).  Anyway, I'm so excited!!  I really, really love it.  ; )  It will get washed and blocked tomorrow, and I'll figure out and get started on the sleeves.

My own contest "moos" tomorrow!

Gee, I knit at the library, too. 5 days a week! Hee hee.
Can't wait to see what's in the package from British Breed Yarns. And Fib is looking FAB.

I'm not sure I've knitted in very many interesting places. I need to get out more.

Fib is FANTASTIC!!! I LOVE the colors. It's going to be wonderful!

I love the way your sweater is turning out! You're so clever to turn a pile of oddballs into such a beautiful design!

Wow! You are knitting that up at the speed of light. It looks great with the yarns you are using.

Fib is WUNDERBAR! I love those yarns, those colors, that tweediness. Hmmm, I don't think I've knitted in many interesting places, either. Zoinks, I forgot to mail my pink squares.

I missed the train for the blue squares, I think I'll check out Cynthia's project.

I can wait to see what moos tomorrow!

Ooh - I can hardly wait to see the finished product. The pictures look fabulous. I just posted my 5 most unusual places I have knit on my blog, too. What a great contest Kat came up with. Happy knitting.

Vicki, the sweater looks fabulous; I just love the colourway. Warming Grace was definitely and largely inspired by Jef and your brother Mike and the inspiring way that knitters have to warm and embrace others in the magical way that knitting can! Warming Grace is taking on a life of it's own; I am in awe.