Trash talk
Kicking up my heel 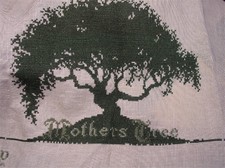 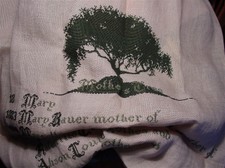 "Mothers Tree," a design by Marilyn Leavitt-Imblum for Lavender & Lace, is right up many of my alleys!  It's the genealogical record of the direct family line from the oft-neglected maternal side.  It includes the year of birth and full name (maiden name and married name) of the eldest, known, direct, female ancestor, followed by the words "mother of."  On the next line is the same info for her daughter, then her daughter, and on and on.  This one is for me and I want to include all three of my daughters, so it has me, mother of Katie and Ali and Maddy.  I haven't done a bit of family history research in the last few years (or perhaps I'd know Mary's surname -- rumored to also be Bauer, but not fact), nor have I stitched on this project.  I was stymied by my grandmother's name for a while -- everywhere I looked there was a different variation of her first name, along with vague attempts at explanation in the form of stories about "too many Marys."  In the end, my family historian persona duly recorded all the variations (and even took a favorite) while deciding that for the sampler, the variation that Grandma used herself was appropriate (even if it isn't my favorite). 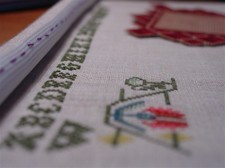 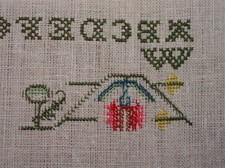 While the Mothers Tree is folded up and hidden away in my workbasket, brought to mind on rare occasion, "The Dorcas Haynes Christmas Sampler," a reproduction sampler taught by Darlene O'Steen at a "Christmas In Williamsburg Seminar," sponsored by Just CrossStitch Magazine in December 1992, taunts me every single day.  I'm taunting myself, of course, in that "stickin' it to The Man/but you are The Man" way; I could stuff it in a drawer or basket, too.  It is a very large band sampler and this is all I've accomplished in nearly 14 years.  If you've done any kind of needlework, you're no stranger to the idea that "the back should be as neat as the front" (that concept is synonymous in my mind with the grandmother of the troublesome name, above); well, this sampler is actually reversible.  You can see that in the stitching of the alphabet letters -- they are full "crosses" on the back, too.  Darlene's parting words were along the line of "just do it"; she encouraged us to stitch it however we wished, even in plain, non-reversible cross-stitch, because it was too pretty a sampler to NOT be stitched.  That's what I did on the band below that first alphabet.

I had a blast on that trip to Williamsburg -- the first big trip away, all by myself, since I'd become a mother.  At the time, Maddy was 20 months old and still nursing a couple of times a day and I joke that I took this trip to wean her or I might still be nursing!  We were both ready, really; I certainly was.  Williamsburg was absolutely gorgeous -- even the dead gardens were gorgeous -- and everything was decorated for Christmas, and there were fireworks.  Really, any guilt I feel when I see that major, unfinished embroidery project on display is completely overshadowed by the good, warm feelings that still come to mind about that trip.

I used to do a lot of counted cross stitch - in fact embroidery will be my E post tomorrow - and I always prided myself on neat backs. Your samplers are beautiful, Vicki. You should be proud of the work you've done there.

I love the embroidery. You do so many many hobbies. Collecting, knitting, embroidery, decorating. A true Renaissance woman!

Hope things are well. Also wanted to say thanks for the pics from Ireland. I enjoyed those so much.

And, inspired by you and many others, I may have bitten off more than I could chew.

Oh, you just reminded me of the samplers (also Lavender and lace, Marilyn) that I have stashed away, unfinished. I seem to feel the need to cross-stitch very rarely these days!
Beautiful! You may inspired me to try again...........

I always wanted to go to Christmas in Williamsburg! Darlene designs such beautiful samplers. I have several in my 'stash'. I did make it to Sampler Gathering once and had some fabulous classes there. I really had no idea you were so into samplers. Samplers are so much a part of women's history and that's the main reason I love them so. Beautiful work, Vicki!

Your embroidery is lovely, the Mothers Tree is fabulous, I have a Lavender and Lace I started when Jake was small,he is now 11, it has been packed away and moved house 3 times now, unfinished of course.

That mother's tree is so beautiful. Ah, maybe think about doing it a little more often, maybe leave it top of your nightstand or something where you will pick it up and do just a little each day or every few days. It's certainly going to be a keepsake your family will cherish.

I also love your Mosiacs. You haven't talked about it in a while. I call it "dish smashing." Gosh, Vick, you really DO have some interesting hobbies.

I love the idea of The Mother's Tree cross stitch. The most frustrating thing about researching geneology is bias to the paternal or "heads of household". Gah!

Oh my, I have always wanted to see Williamsburg decorated for Christmas! How lucky. I too have a sampler tucked away somewhere to list three children, but got bored with the long, same stretches. Knitting really IS my true love, but I admire your fine embroidery work.

I went to college in Williamsburg - one of the better choices I made in life. It was a blast to get to take classes in buildings in use since the 17th century (oh, and have a free pass to all the historic stuff didn't hurt either)!