One of these things is not like the other...

...but is it close enough?  Two hanks of STR, both Petrified Wood; the one on the left is not as dark.  Are they close enough to be siblings or are they destined to be cousins? 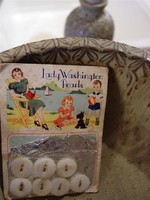 The card of "Lady Washington Pearls" was one of the sewing notions that my sister gave me -- nestled now, as then, inside one of the cereal bowls that she decorated. In the background is one of her soap dispensers that I've had for quite some time.  These bowls are a newer shape for her, much more open than most of the bowls she's decorated previously.  Because they're so open, she felt they needed decoration on the inside, too.  Some of them, like this one, are even decorated over the rim. In late winter/early fall, she also started decorating Christmas ornaments.  I forgot!  She gave me a couple of those, too!  (Damn it. Ann, I want you to know that stopped in the middle of the blogging to take ornament pictures.)  I think these are stunning, but they don't hold a candle to the personalized ornament she made for Grandma that had all of the grandchildren's names in the design.  I think my sister's work, her unique design and technique, is breathtaking -- and I don't think I'm being partial.  I can hook you up, shamelessly, if you're interested.

I admit it.  I'm sick.  I've been fighting the fight, but it's winning today.  Thank goodness it's my regularly scheduled day off.  It's been so dreary and foggy and gray -- doesn't help much.  Katie is thinking of our recent weather as a little taste of what might be in store for her beginning in less than two weeks when she flies off to London for a few months.

I called a restaurant yesterday to make reservations for a farewell family send-off dinner for Katie -- all of us, plus my mom and her husband.  There's a great, fairly new restaurant, right on the river, in what used to be an old mill -- I mean it, at some of the tables, you look out and there's the gurgling water below.  So I called to make a reservation, more than a week in advance, because this is a pretty special occasion and I wanted to reserve one of those on-the-water tables.  Does that not make sense??  I was told that they don't reserve specific tables.  I got a little hot under the collar, as I sometimes do -- and I may have said, "frickin' " in the course of ensuing conversation.  I don't really get it.  There probably won't be a problem, because it's early-ish on a Thursday night, but I asked whether I could wait for the table I want to become available.  I can.  I will.

Two more things:  The time for embracing the inner sloth is coming to an end (one sign of this is that my gift box of chocolates is pretty much empty now).  I have signed up and plunked down the money for a two-hour yoga workshop for utter beginners (me) this Saturday.  In a couple of weeks, I'm going to cancel Weight Watchers Online -- not enough interaction and I think I need interaction -- and start attending Tuesday night meetings.

I'm off to cuddle and knit -- with a box of tissues nearby.

Awww, sorry you're sick. I'm just now getting over my flu/cold that started before Christmas. Bleah.

The restaurant sounds cool. Hope you all get the table you want.

And the ornaments and the bowls are awesome. I would love to be "hooked up" heh.

Having seen Vicki's sister's work in person, on my dining room table, I can say that it is without a doubt, gorgeous! I LOVE the ornaments! I might need some for next year. Does she do commissions?

I'm so sorry your sick. Feel better soon honey! And I'm with you on the sloth thing. I actually ran today - the first time in forever. It felt really good though.

Oh and I think the socks look fine - it's hard to tell from the picture though. I guess it comes down to how you feel about it. I just got some the other day - let me know and it's yours.

I think the blogosphere can keep your sis in bowl production for quite a while, please "hook me up" as well! Those are GORGEOUS!

The "After holiday creeping crud" has hit here as well!. UGH. We'll all sit on the couch together and knit and sniffle!

Your Jaywalker looks so beautiful! Don't worry about them not matching perfectly. How often are your feet *right* next to one another and still!?

The bowls are beautiful and so are the ornaments.
From here your socks look fine. How do you feel about them? On your feet would anyone really notice?
Do get well quickly. That stuff is sure making the rounds.

omg I lovelovelove those ornaments.

and I think the socks look fine. but then I never try to match my sel-striping yarns, either.

the socks look great. embrace their fraternal differences, they make them unique and beautiful! one IS a little more stripy than the other but no one will look that closely and they're too lovely to frog! feel better soon...

The first thing I thought was where can I get me some! Hook me up. Please! And feel better. My inner sloth is being held down by injury. I am getting a lot of swatching done though.....

Those socks are turning out beautifully!!!

And as far as WW is concerned, I go to Saturday meetings. Just started back last week. I also find the online subscription helpful in finding recipes and doing my journal online. If I could ever find my Palm Pilot again (it's lost in the house) then I could use it to journal electronically. Grr. I'm on the Core program BTW. Chelle

Hi there! The bowls your sister made are just beautiful, as are the ornaments. I have to laugh every time I see your socks though, because in my head I think of them as the deer in the headlight socks! My head is an interesting place to be lately lol.

Your sister's work is indeed breathtaking. I'd ask you to hook me up, but my budget is still recovering from Christmas. Maybe some time soon, though.

more cries for hook me up! those are gorgeous bowls - and thank you for stopping everything to take pictures of the ornaments!

ps. I absolutely cannot imagine you getting hot under the collar....as a matter of fact thinking of all you laid back midwesterners fighting makes me giggle a bit.... a big too-do on Lake Woebegon!

Oh good christ, those bowls are gorgeous...I don't think you're being partial at all.

Good for you for signing up for the yoga class...as for myself, I don't need interaction, I need an intervention. waddle, waddle...

Your sister's cereal bowls are just gorgeous! You have to talk her into getting a website! (I'd buy them!)

I second elisa with the Yoga class. It's a really good springboard for motivating you to be healthier. Good for you!

Your sister's work is gorgeous! Very classic and beautiful.

Nasty sniffles, they should be banned. Get well soon, you've got a table to lay in wait for ;)
Good luck with the meeting, I'm much better at being good with the threat of being weighed right there in front of someone! Take a sock or something and get a few more people knitting there too, it might help them stop nibbling!