It seems that the stars are aligning and colliding and mushrooming and the heavens have practically parted and I'm poised to experience some sort of knit-blogger utopian nirvana weekend of unbelievable proportion (for me, at least) beginning tomorrow afternoon when I arrive in Newark.  Yes, folks, knitting nirvana begins in Newark!  That is where I will be met by a certain purlingswine (aka, the hostess with the mostest -- that's how I think of it, Katy) and then whisked away to Long Island via Onslow (that's traveling in style!) to meet Poe and all his furry cohorts.  I will visit knitters' Gettysburg -- the exact site of the infamous cake plate incident about which we mostly remember the cheesecake and to which there may someday be a commemorative bronze memorial erected at the end of Ann's driveway with an on-your-honor admission box and everything (but please don't feed the animals), but about which I hope not to be setting any precedents by staging a reenactment.  Please, don't let me break anything!  I may be staying in a room there that could very well be identified with a plaque on the door that reads, "Small Hands Have Slept Here."

On Friday, we'll pick up Cara and head to a hotel in Poughkeepsie where, I'm told, lots of bloggers stay and where, I'm told, an additional room had to be booked for our ever-growing party!  I don't even know who-all is in that party!  Speaking of party, it will all begin with Norma's celebration of Nathania's Nuptials -- or something like that.  The weekend will be full of Sheep and Wool in Rhinebeck and with a little taste of The Sheep Shearer.  I don't know about anyone else, but my motto for the weekend is, "What Happens in Rhinebeck (or Poughkeepsie), Stays in Rhinebeck (or Poughkeepsie)!"  Heehee.

I am just thrilled that the featured breed is Tunis -- a redhead!  I'll definitely have to get some of that wool.  I'm really looking forward to meeting bloggers at the meet-up (see Cara's sidebar).  It ought to be a blast.  I'm bringing Sharpies, Wendy! 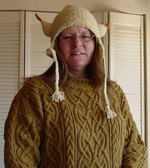 I may get a chance to post tomorrow morning before leaving, but I may not.  I have lots to do and decisions to make about what to pack.  I'm bringing my Socktoberfest sock, of course (hm, I'm still the only "V"), which travels in a bag with the long-neglected (but not forgotten) red Tivoli-T -- so that's a DPN project and a circ project.  On straights, I'm swatching some Mission Falls Cotton for that Shirley Paden Cabled Shrug (IK) which I want to modify, so I'll be bringing the needles, yarn, pattern and other inspiration for that.  I haven't received my Weasley stuff yet, but should I start a different sweater for M*c?  And what to wear.  I won't have a new sweater for Rhinebeck, as hoped, but I do have my new-ish Caryl's Kerchief and my favorite Shawlette, and I'll probably bring Oatmeal and St. Brigid, too.  With the wonky-legged hat or without?

Sounds like you're gonna have a wonderful trip! Looking forward to trying to find you in with the other bloggers on Saturday! Maybe I should just have a name tag that says "Blogger Stalker" or something..heh.

Hopefully it will stop raining on Saturday. Unfortunately, we are gonna have rain in the area until then. Bleah.

What fun! I missed your post of the girls - what a great photo, recreated!!

Oh and I just got off the phone with Ann. While I was talking with her she started going nuts screaming and I heard this horrible sound in the background then the phone went dead.

Thankfully she called me back. I was on the other line with my sister telling her that something horrible had just happened to my friend Ann. I think maybe her dog, she's got five, might have been choking. Well, no. Her dogs are FIGHTING! (Personally I think she's got some of kind of puppy cock fighting ring going on out there on LonGUYLand.)

Turns out I'm not going to Philly but Ann still wants you - now if YOU want out of that jungle she calls home, you've got my number.

Oh and any room in your luggage for an ARK? You might need it. ;-)

Give everyone a hug from me and have them give you one back;-)

Have a wonderful stupendous fabulous time. Without me. If you can!

Definitely WITH the hat. I'm recycling Plain Vanilla, so you will be upstaging me with St. Brigid. FINE. Be THAT WAY!

WITH! I hope you have a wonderful Rheinbeck. I'll look forward to reading about your adventures after you return.

Can't wait to see you tomorrow!

Have a wonderful weekend! Look forward to hearing about it. Definitely bring the hat.

Sounds like a fantastic trip, I am very jealous, take lots of photos and definitely take the hat! Have fun.

Yeah! I'll see you at 1:00 p.m. outside building E. I'm looking forward to finally meeting you.

The hat must go, definitely! Love the sweater too, I'd say it's also a must. Can't wait to here the Rhinebeck tales, somehow, someway I'm going next year!

You get to meet NORMA? You're kidding. I'm so jealous. I find myself trying to copy her and Margene (Zeneedle) way too much. Today, after seeing her Rhinebeck outfit - i.e. plain vanilla sweater and her Cascade project bag, I ended up going online and ordering the yarn for that darn plain vanilla sweater. Chelle

I know you will have the BEST time! I can't wait to read all about it!

With, I say with.

:0 Have fun. Can you post the price of the yarns you purchase? With some websites. Since some of us cannot attend, I'd love some info. from the festival.