My weekend started with a bang early Saturday morning (though not as early as it could have been) when I went raspberry picking with a neighbor.  Picking started at 6:30 (I was told that cars start lining the road shortly after 5:00) and we got there at 8:00 and, by that time, were told it was pretty picked over, but there were still plenty of berries -- we'd just have to work harder for them.  I worked up one row and down another and, indeed, I was on my knees a lot and my arms got a little scratched up and they weren't the biggest berries you ever saw, but I filled an ice cream bucket about 2/3 full and only popped a few (quality control, you know) in the process.  Over the weekend, we ate them by the handful, in a bowl with sugar and cream, and in a pie*.  It was back-breaking. 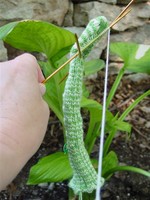 A few hours later, I was at a farmer's market with my mom where I found this lovely Guacamole hosta -- in a vendor's booth where there were nothing but hostas!  Oh, they were all so lovely and she was so nice and I wonder how many more hostas I'll be hauling home this summer...  Guacamole has been on my list for quite some time, and I don't feel bad about that spontaneous purchase at all!  I also brought home a cute little viola and a maroon-colored sedum for DH.

On Sunday, I was digging up extras from mom's yard and finding places for them in my own.  The two hostas closest to the lilac bush are new; the Patriot variety was split and the other half put elsewhere, along with a Fire & Ice (mini) hosta, some ligularia and some wild ginger.  It wasn't Bickram Yoga, but I was drenched in sweat (mixed with soil) by the time I was finished planting.  It was back-breaking, too.

The Blue Angel hostas are blooming -- they're the ones that helped model the last pair of baby booties, remember?  They have more flowers this year than ever before.  I dragged down the old chair that I keep on the porch for scale.  I love that hosta.

So with all the sweaty, back-breaking work following close on the heels of the arm-numbing bathroom tile grouting, I've decided that today will be recovery day!  I'm not going to do much except help Kt get some stuff up on ebay (she needs $ for that trip to London, you know), maybe go shopping for a new shower curtain rod (still waiting for caulk and tub spout) and knit on my sock.

Can you believe it?  I'm knitting a sock!  It was the Lorna's Laces Shepherd Sock yarn that I purchased at Purl, combined with the Rib & Cable Socks pattern in the latest Interweave Knits that finally spurred me to do it.  What you see by Guacamole is Try #2 (larger needles) and I'm still kind of crossing my fingers -- it'll fit someone, I'm just not sure that someone will be me.  I have just turned the heel (that took two tries, too) and started the gusset.  There's other sock yarn in my stash that I'm dying to knit now.  Who knew (well, a great many of you did, I guess) that sock knitting is perfect for comfort and recovery?

Place strawberries in pie crust.  Combine dry Jell-o and pudding mixes with water in saucepan.  Cook over medium heat until it boils and thickens.  Spoon evenly over berries.  Refrigerate for 2 hours.  Spread Cool Whip over top and garnish with berries.

My mom got this recipe at Weight Watchers (it's 2 points for 1/8 of a pie) and it couldn't be easier to make -- unless you use raspberries because then you don't even have to slice them!  I substituted raspberries for strawberries and used raspberry Jell-o and it was very, very good.  We're probably going to experiment all summer long with different kinds of fruit...

lovely plants and sock! welcome to the seductive world of sock knitting - I feel like I am making little works of art when I knit socks

Gardening and sock knitting...perfect! (I always go up one or two sizes of needle for Nancy's socks).

Your Hostas look great .... AND you are sock knitting....great weekend!

Sounds like you've been working very hard this week-end! Your hostas look amazing...mine haven't bloomed yet, but the buds are getting bigger and bigger. Enjoy your day of rest, you deserve it!

Hostas always look so cooling, I haven't planted any in this garden yet although I had about 4 different varieties at our last house. Time to rectify the situation I think!