Back in the land of cheese
Can't you see I'm busy?

Wipe your hands and whip out the knitting 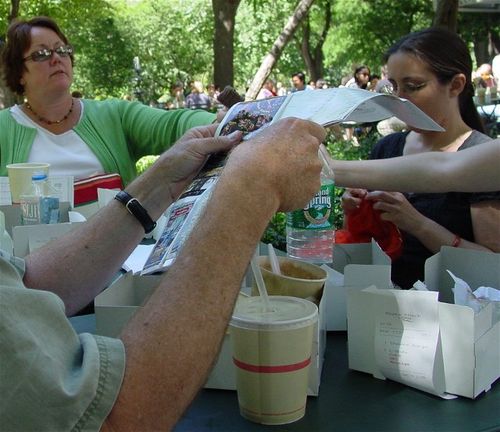 When we finished our very fine lunch in the park, we wiped our hands and replaced our napkins with knitting.  Did you see Cassie's very fine Birch yesterday?  We saw it up close and personal, still on the needles -- do you see it through the mess?  DH was studying the subway map, intent on his route... 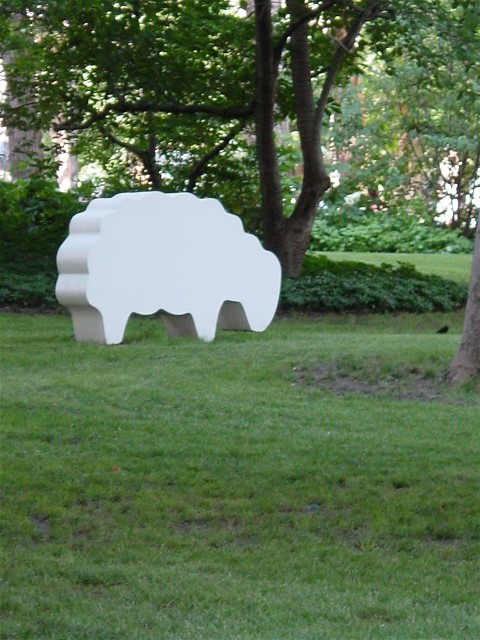 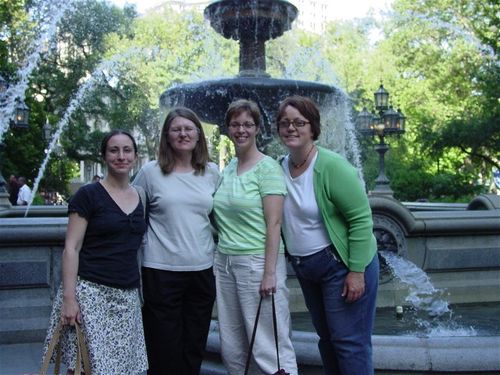 I think these two were taken in the same general area -- the fountain, for sure, is near City Hall.  And who'd have guessed there'd be sheep (and other animals) in the middle of the city!  Isn't he cute?  Thanks for snapping that fountain pic, Lauren! 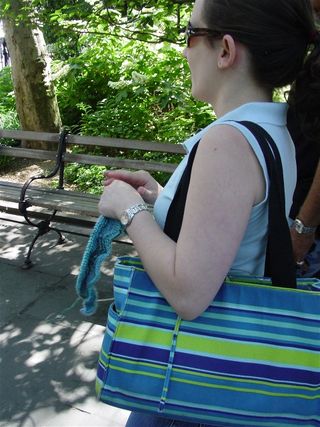 Here's one of Lauren -- walking, talking, and knitting! 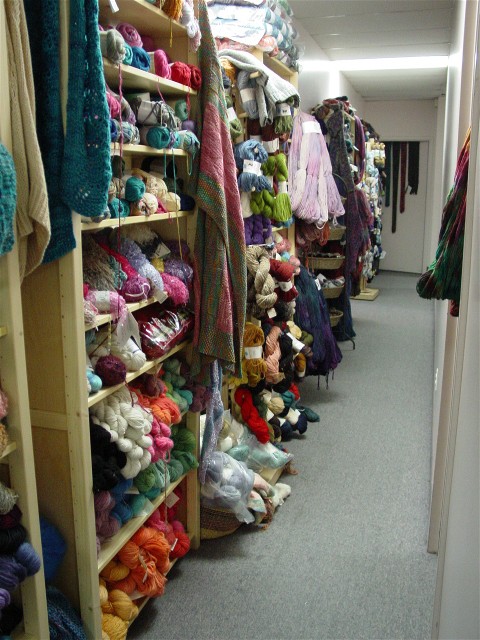 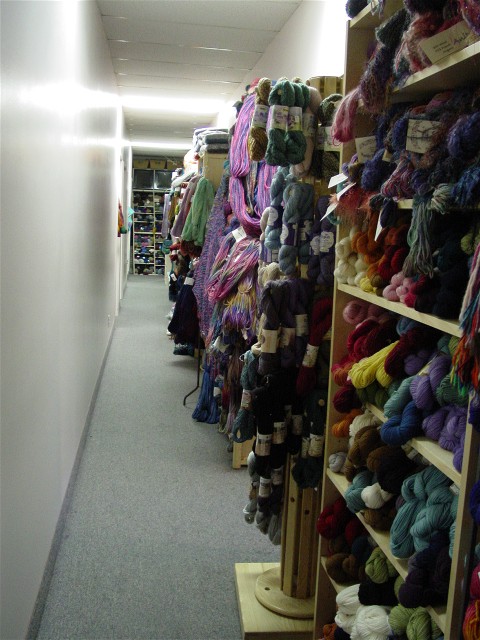 This is the hallway at Seaport Yarn -- it's the same hall, shot from either end.  There's another small hall with a great collection of books and a little more yarn, and at least three offices filled with yarn -- all amidst the other offices that are mostly not filled with yarn!  I was definitely on overload here and that's too bad because they had lots of stuff and darn good prices. 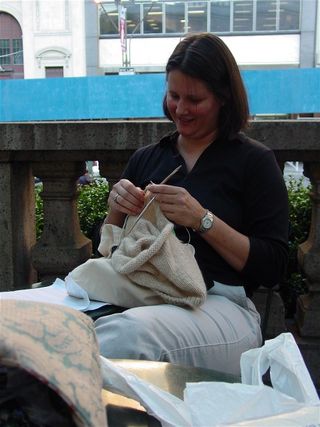 And then, as you've no doubt already read elsewhere, it was off to The Yarn Connection to meet Kathleen!  I'd been so sure, and I know Katy was, too, that the only way I'd meet her was if she came to Knitting Camp in Wisconsin.  She'd not had the best of days, but she was great company and it was so fun to hang out at the library and knit! 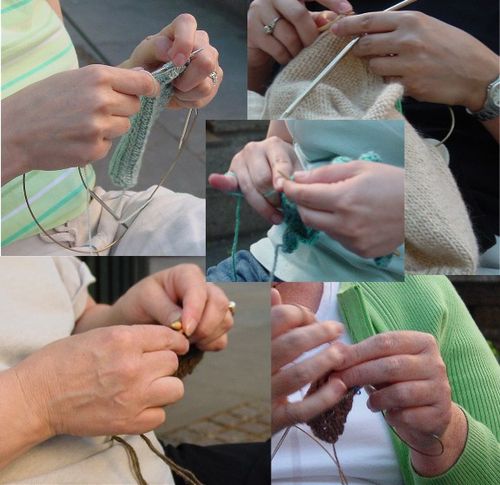 Fun with collage (clockwise from top left):  Cara, Katy, Ann, me, and Lauren in the center. 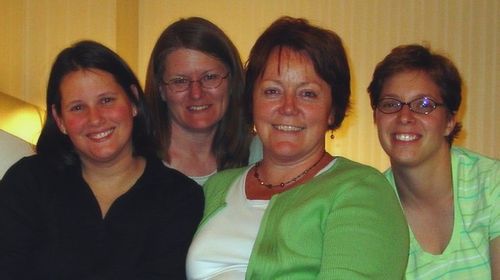 Lauren had to run and catch her train, and the rest of us went out for pizza at John's Pizzeria.  Yes, I'm one of those who eats pizza with a fork -- usually.  Just not so crazy about sticky fingers.  But I picked it up and folded it and, mmmmm, it was awfully good pizza.  The grrs brought me back to the hotel where we visited with DH for a bit (he was home early!) and threw all the pillows off the bed so there was room for us and a photo op.

I love your collage of all hands knitting. What fun you all had.

Wow, it looks like you had your own NYC Yarn Festival, complete with a sheep...of sorts.

So glad you had such a good time.

The knitting hands pictures is the very best!

That collage is very cool. You are not gonna need my button for much longer. You've got some talent there. It was so good to finally meet you...and amongst such wonderful company.

What a great idea! Hands knitting. I wonder if we could have guessed each of you if we had not been told?

The collage is great! I'm waiting for a pillow review at some point.

Awesome! Did you notice our boobies are touching in the picture by the fountain? So funny!

Love the hand pictures too - I'm loving my wedding ring in all your pictures - I forget sometimes how much I love it. (Okay - everyone go look again - it looks particularly nice in yesterday's button shop pictures!) ;-)

It's so boring here now. When are you coming back?

Yep, the giant sheep and the fountain are both in City Hall park. I like the way Ann and Cara look like they dressed to match each other. Love the hand pictures!

Yippee for the hand collage. Your NYC adventures make me want to buy a ticket and head that way again. What fun!

I was enjoying all the pictures and then I read Cara's comment. Now I'm jealous - our boobies never touched!

Did I say it yesterday?.. Welcome home! I kept Wisconsin nice and muggy for ya! Perfect frying out weather :)

Your trip looks wonderful. The collage is beautiful. It would be neat to see how many pictures of hands you could add from all of the bloggers you have met online. I bet it would be HUGE! Did you plan the trip as a chance to meet other bloggers, or did meeting up with the bloggers come after you planned to go to NYC? Either way, it looks like it turned out really well! I'm WAY jealous. When I went on a trip to London I tried to meet up with some people I had met on a board, but it didn't work out.