Back in the land of cheese

I had a wonderful time in NYC!  I can't thank Cara enough for all her planning, help, patience, and schlepping.  She's a wonderful person and terrific to hang out with, and I'm so thankful!

DH & I left late Wednesday afternoon, set to arrive NY at 7:30, and then were stuck in Chicago for three hours because of a storm in NY and resulting gridlock at LaGuardia.  They let us off the plane for a while, which was good, but it was still a long wait.

I became less miffed about the delay when we flew over Cleveland at dusk and I saw Jacobs Field aglow as the Indians played the Red Sox (and lost) -- what a cool thing to see from the air.  Then, as we flew further east and it got darker and darker, we could see lingering lightning in the distance as well as ever more lights on the ground, and that was cool, too.  But it really got good when the moon started to rise -- a big, full moon, rising over the Atlantic, peeking out between a few little clouds as we approached New York City.  Could it get any better?  Why, yes, it can!  Our plane basically flew a circle around Manhattan (and my seat was on the right side of the plane!) -- the Empire State Building, the Chrysler Building, the million other buildings and Times Square, all illuminated and breathtaking -- and any lingering angst I felt over the delay at O'Hare was totally gone and I was almost thankful instead.  Go figure -- I like the bright lights, I guess! 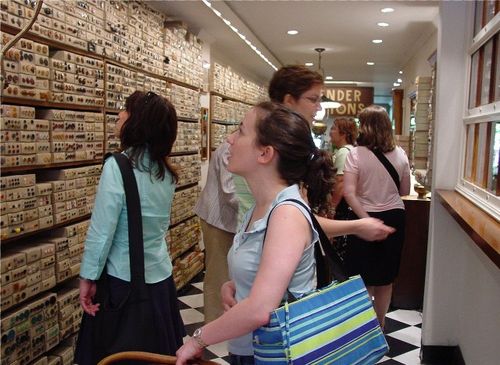 On Thursday morning, Cara, Jen, and Lauren picked me up at the hotel and we hoofed it up Lexington to Tender Buttons.  I knew we'd be going there, so I brought two sweaters-in-need with me:  a blue cotton sweater that I finished over a year ago and the fruit sweater that my sister knit for me ages ago.  I found some nice, matte blue buttons for the first, and the most perfect, porcelain buttons in the shape of cherry clusters for the second!  The store was wonderful, but it was good to have a focus.  Jen found buttons for a baby sweater, and Cara founds some to match her cabled cardigan swatch, and -- Lauren, did you buy buttons? 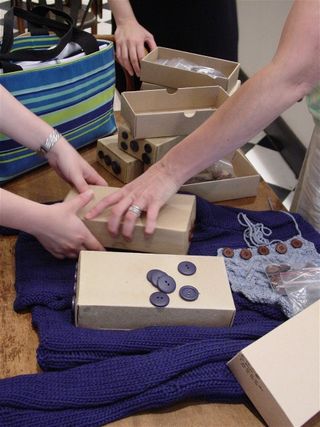 After the button shopping, we went to School Products where Cassie, Nancy and Ann were already visiting and shopping.  I got to look my Cold Turkey Quit Buddy in the eye -- and give her a big hug, too.  It sure was great to meet her!  Cara is right, Ann's gotta let loose on the blog a bit more.  I love her blog, but I love her more!  I was so happy, too, that Cassie was able to get away -- that was a nice surprise!  The store was not very big, but I was already overwhelmed -- bright lights, big city, zillions of buttons, imaginary friends come to life -- though I did manage to walk away with four hanks of a wool/cotton in a nice, soft green (with Mack, "son of the learned ruler," in mind). 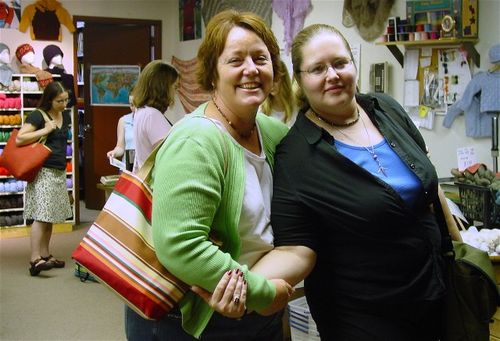 Jen had to leave us after School Products -- but not before choosing a mini Sharpie with which to leave a memory in my book (a Knitters Without Borders book from Cafe Press).  For her trouble, she received a Cheesehead eraser, as did all bloggers who wrote in my book (until I ran out, that is).  Personally, I can't think "blogger meet-up" without thinking of The Bookish Girl and Sharpies... can you? 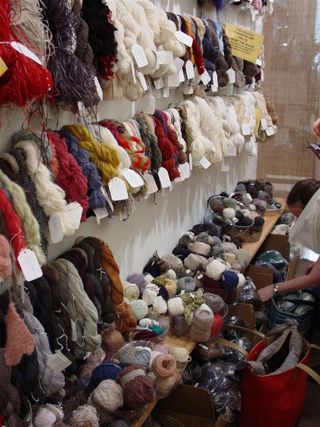 Then it was on to Habu Textiles and all I could do was feel stuff.  Truly amazing.  The picture is in a very narrow room -- more like a hallway, really -- and you see Cassie's bag and Lauren's arm.  I think they both found something -- or, if Cassie didn't, she was a great enabler!  Color, texture, quantity -- I think my eyes glazed over while we were there.

And then it was time for lunch!  DH had been off doing his own thing and we met him for burgers at the Shake Shack at Madison Square Park.  Yum.  It was a bit of a wait, but it was fun, and the weather couldn't have been better!

Okay, that's all I have time for today.  Landed back in the real world with a thud yesterday afternoon and it's made a big mess on my desk!  Tune in tomorrow for more NY adventures.

Miss you already! You were the PERFECT guest. Thank you both for coming to visit.

Son of the Learned Ruler...ha ha ha. What did I think it was? Son of the learned Buddha or something like that. I was doing that all day. LOL.

Hope you settle back in without too much work. Looking forward to tomorrow!

No buttons for me. Even though I look entranced by the wall of them. I didn't realize that Mac's name is spelled with two Ns.

Sounds like soooo much fun. Too bad it's back to reality time though. I guess it makes you really appreciate the special times.

I love love love Tender Buttons & am so glad there is a Chicago version of it. Probably the selection was better in NY so I'm sure it was fun!

I don't go there without specific garments in mind either though. Too many choices...

It was wonderful to meet you. Can't wait till we see each other again.

Be still my heart.

Wow, that looks like fun. That is a terrific picture of Lauren....I'd go MAD in that button place. Someone (cough, CASSIE!) better take me there!

Vicki, it was so great to get to meet you. All of these wonderful blogger visits.... my head is spinning!