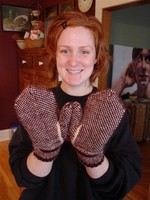 I was surprised last night when I reviewed the weekend and realized that I actually got a lot done!  I finished the Natalya mitts for Mom (Happy Birthday/Anniversary Mom!) on Friday night.  On Saturday morning, they were washed and blocked along with the second North Star Mitten.  I've added pics of both to the Recently Completed photo album, as well as a pic of the tassled Tanguy hat!  Here's Kate showing the mitten palms and thumbs of equal length.  ; )  And Mom liked her mitts, once she figured out what they were.

Katie wants Natalya mitts, Ali wants Natalya mitts, Maddy wants Natalya mitts; actually, Maddy only wants one mitt and she pleaded with me to start on Friday night so that there'd be a chance of wearing it to school on Monday.  What's a mother to do?  Well, I'm not like that damn darn Norma.  I ignored the plea, mentioned that it was something that she could knit herself (with help, I would do that, but it would be a tubular straight-needle affair), and selfishly carried on with what I intended to do -- work on St. Brigid. 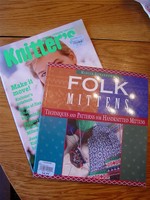 I'll admit that Saturday morning was quite lazy, but Katie, Ali & I got it together enough to go thrifting by early afternoon.  Kate found this cute, handmade, vintage cape -- nicely made (I pointed out how neatly the mitred plaid stripes lined up at the seams) with cute frog closures.  I usually don't find much of knitterly value when thrifting, but I never give up and hey, it paid off!  I found Folk Mittens for $4.99 at Goodwill!  And an issue of Knitter's from '86, I believe; I bought it for the articles. 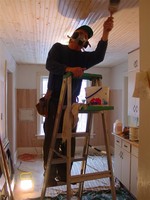 On Sunday morning, while I was making Chili All Day, DH was staining the ceiling.  Once the fumes subsided (early afternoon), I started wallpapering.  As I cut lengths, I discovered that the registration was wonky about half-way through one roll and got increasingly worse.  It's not like there's a color missing or got weird, but it's not nice and crisp.  It'll call for some strategic placement to minimize, because I can't get any more!  It's looking very cute; a sparse design of large pansies in muted colors that is reminiscent of a '30s-40s kitchen -- and that's exactly what this is!  I think I almost reached the half-way point by quitting time.

I think the weekend accomplishment about which I am most thrilled is that I finished the back of St. Brigid last night!!  I'll try to post some pics tomorrow.  I did seven repeats and the length is perfect.  Yowza!  I'll be casting on the front tonight and now I really am beginning to see the light!

You achieved lots this weekend, don't you just love it when that happens. Your mitts, mittens and hat look great AND thrift shop shopping, Katies' cape is fabulous.

Cute mittens, Vicki! and the thrifting sounds like so much fun! I have to go and uncover some great finds at my local thrift shop...

Tell Katie that I am TOTALLY digging that cape, and I love her hair too :)

Have a great week!

You did it! They look marvelous.

Those mittens are the cutest! I love doing color work but still have a norwegian sweater needing sleaves.(they will get done, they will get done) Mittens seem like the perfect almost instant gratification for color knitting. What an inspiration.
Good luck on the wall paper. My brother just wasted $80 trying to wall paper a textured wall for his new baby's room. The texture just wouldn't allow it even with liner. It seems that there is a wall paper jinx about.

Great mittens - YAY for you, Vicki! Love the pics of Katie, too. Peter (my 7yo) was nearby and asked if she could come babysit! ;)

Katie is quite photogenic! And what a darling hair cut. You accomplished so much...I am in awe that the back of your St. Brigid is finished. The deadline for mine is next Christmas, I'm afraid. (that darned spinning is foiling my plans)

I like that ceiling,(the mittens too) I can't wait to see a picture of the wallpaper.

My goodness, you're an industrious bunch! Love the look of the new kitchen area upstairs...so nice to have a handy man (hee hee) living in.

The mittens turned out beautiful...alas, I have put my one color mittens away for a bit...and am focusing on a scarf...I am so boring...I want to do a Alice Starmore pattern, but I think I will slowly work up to her stuff...I envy you working on St. Brigid.

Oh, and a Duncan picture too! Yay! (And Katie looks adorable in the cape!)

I'm tired just reading about all of it! You've got some beautiful daughters there! (Thanks for sweet comment!)

Well, Vicki, I would have splayed out any beverage at the computer screen had I been drinking any when I read "I bought it for the articles!" haha! Good one! I never believed it when hubby said it about playboy and I don't believe it for a minute with your little magazine! hahahahah!
Great, great mittens. Go St. Brigid!

Holy cow! Folk Mittens at the Goodwill. Damn darn, nothing good like that EVER happens to me!!!