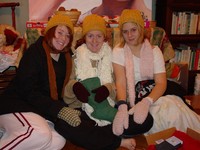 It was a very knitterly Christmas!  The grrs are modeling the mittens (thrummed or not) and Waterspun Weekend hats I've knit for them over the past few months.  Scarves, from left to right:  Ai is wearing a lacy scarf that Kt knit for her; Kt sports a scarf from Target given to her by Mdd, and Mdd is wearing a soft, fluffy, drop-stitch scarf that Ai made for her.  Woo.  No one will get cold 'round here. 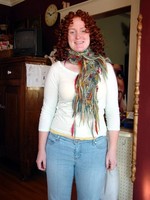 For the first time ever, DH and I were awake before the kids on Christmas morning, thanks to the kitties.  The phone rang just after 9 -- one of Mdd's friends with news of an exciting present -- and the grrs began to appear. 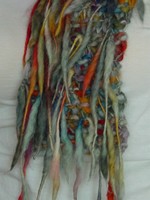 I was finally able to get a shot of Kt's finished Point 5 scarf.  This was inspired by the very scarf from Target that Mdd gave her for Christmas.  She used two hanks of yarn, knit a narrow garter scarf, and tied on bits of yarn at each end.  She has received lot of compliments on this scarf, and why not?  I think it's a very striking scarf.

It was a great holiday weekend with lots of family visiting and way too much eating.  I wished DH a happy birthday yesterday and then waved to him and the grrs as they set off on an adventure combined with business trip to the Gulf.  While I enjoyed "The Life Aquatic with Steve Zissou" last night with my sister and nephew, they called with news of a broken down van (some sort of belt problem they think) at a toll booth and an unexpected overnight stay in Illinois.  I'm awaiting news this morning -- hoping and praying that it's a little thing and not a big thing and that they can be on their way shortly.

Love the scarf - although it looks more like art than scarf. Sounds like you had a lovely Xmas!

Great picture of your girls. And, I love Katie's scarf~ very fun and funky!

it does look more like art than scarf! I have my fingers crossed that their car problems are resolved and they are on their way!

That is a great picture of your girls in their woolies! I ope they were similarly attired when the car broke down. It looks loike you have some time to yourself. Enjoy .

Love the girls' mittens, and the Point 5 scarf. I have some Point 5 that is just sitting around with nothing to do... maybe this striking scarf is just the thing!

Hope you have a great week!

Great picture of your girls - they look super happy! I love the funky point 5 scarf - soooo creative. Glad you had a good holiday with your family! :)

I sure hope your family has made it through Illinois. There must be some kind of van demon there. We were driving to Florida with our camper a few years ago and split open a tire on the curbing at an oasis in Illinois. Duck tape can fix most everything!