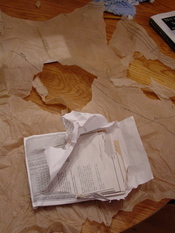 It was sort of like unfolding paper dolls...  Mickey got hold of the skirt pattern yesterday!  I think we can still use it.  Aaarrgh.

Lucky for Mickey, I saw Ai's letter of acceptance for the UW school she wants to attend next fall before I saw what she did to the pattern!  Yay! 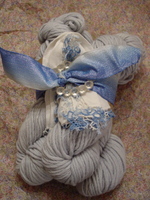 Here's the lovely prize alpaca that was in my mailbox the other day.  Isn't it lovely?  Very soft, pretty blue.  A lovely, old hanky with a tatted edge was tucked under the ribbon.  I love old hankies, Lynne, how did you know?  A few years ago, I basted old hankies, most with floral designs, to a muslin casing to use as a valance in the garden room.  With eastern and southern exposure, many have faded quite badly, but I still love it!

We watched House last night.  DH doesn't really watch much TV, but he saw this show last week and liked it.  He liked it so much that he actually looked at TV listings the other night to verify the time.  I like Dr. House, but I hope the show develops a bit more.  I had a moment of near-rapture at the end of the show, when a Rickie Lee Jones song was playing.  I don't recall the name of the song, but I know I have the album (yup, real vinyl) and it's a favorite song -- one I'd forgotten about.  It was instantly familiar and I was transported -- to no specific time or place, but it's apparent that there are some good times associated with Rickie Lee's songs.  Yeah, Chuck E. always makes me smile...

I'm gonna have to hook up that turntable and rifle through the album collection!

There was knitting, but no progress.  I knitted the last couple of rows on the Shapely Shawlette and then started casting off.  I didn't leave enough yarn, so had to undo what I'd done (almost half), and then undo an entire row besides.  By that time, I didn't feel like it anymore; it's a double cast-off process that requires some concentration on my part, and I want to start and finish in the same sitting.  I thought about starting a mitten.  I actually did something I haven't done in a long time -- went to bed "early"!

One sister will be arriving late this afternoon and leaving tomorrow evening; another sister will be arriving tomorrow evening and staying for at least part of the weekend (there will be shopping); the other sister won't be coming at all; and my brother will be going to his FIL's for Thanksgiving.  Headquarters will be at Mom's; my house, a mile away, serves as an outpost.  DH will be making pie -- two pumpkin, for sure, and maybe an apple.

Good luck with the pattern. The skirts are looking great so far.

Our cat used to do that to paper patterns, nightmare!
Have a great Thanksgiving dinner with your family.

Have a great Thanskgiving with your family!

Have a super Thanksgiving!

You have a husband that MAKES pies? Mine just requests them. Frequently. Enjoy the fruits of his labours. Happy Thanksgiving.

I watched House last week and I wasn't too excited about it, even though I'm a Hugh Laurie fan. I didn't watch it last night, but I guess I'll have to give it another try next week.

Have a great Thanksgiving!

ergh -- those patterns are flimsy enough to begin with without the canine 'help'! why do we love these crazy dogs so much??

ps. it is indeed a sewing machine in that picture - and it was my great-grandmother's - and it actually works! the table top sort of flips open to make an expanded work surface .... I have a couple of old sewing machines, but that one has the family ties.

A most Happy Thanksgiving Day to you and your family! I'm so glad you loved your package.

I am so happy for you all! We have hit our baby dry spell in our family, next up, my kids! So it is sad not having a little one around to cuddle. Enjoy!

OOps sorry, reading all your posts I've missed to get caught up and posted comment on the wrong post! Comment about your sisters baby needed to go on the baby post ugh!
I am all caught up now : )