knitorious
Home Archives Profile
Milestones
What do we have here?

On Friday, I had an email from the shop in Madison where I’d inquired about availability of the Cascade 220 I wanted for St. Brigid; I’d been expecting to hear from them nearly two weeks ago. In the meantime, I made my first-ever inquiry at ThreadBear about the Cascade (and also about the extra Calmer that I need); they had it cheaper and with no special order surcharge, so I placed the order and was waiting for Rob to get back to me for billing information. Imagine my utter surprise at coming home on Friday night to find a box, shipped directly from Cascade, with the yarn I ordered for St. Brigid. Granted, ThreadBear knows where to find me, but I'm a lake and a state away and I just can't get over it. Wow.

On Saturday, I decided that housecleaning was long overdue – and some rearranging and organizing. My house is nearly 120 years old and has been remuddled some over the years. Our main living area was originally three rooms – entry/stair hall, front parlor, and parlor – and is now two offset rooms divided by an oak pillar thing. (The oak pillar thing is one of the three things I saw upon first entering our house that sold it, along with the staircase and the front door with oval window.) Because of traffic flow, the actual space for arrangement of furniture is, let’s say, cozy. Maybe my furniture is just a tad too big, or maybe I have too much. Not too long ago, I was going to rearrange and after pushing stuff around for a while, it all ended up back in its original position! This time, I succeeded, and was organizing the yarn stash when the phone rang. It was Rob, from ThreadBear, wondering if I’d received the Cascade. What trust! We settled payment, and the Calmer will be in the mail on Monday. Woohoo. 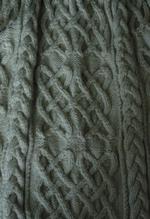 I’m in the midst of swatching for St. Brigid. I don't have much in the way of fancy needles. I have lots of aluminum Boye and Bates needles, and a few bamboos. I didn’t get gauge with the aluminum US7s (stitches are close, rows are way off), it was closer with the US8s, but I didn’t like how it looked. I switched to bamboo US8s and I think that's what we'll have to go with. I'll be doing some math before I decide for sure. I took a pic, but forgot to send it to myself.

But we do have pics of Cromarty. Way up at the top are newly wound balls from the frogged Audrey; may she rest in peace. All this time, I've left what I'd completed intact -- on the needles, even -- and in my cleaning/organizing mode, I decided that it was time to move on. In the middle is a terrible picture of the overall progress. I am a little over half-way, and I can feel the finish line! At right is a close-up of the three completed main charts flanked by the fixed cables. They are not as crisp and nice as they once were, but there aren't any mistakes, either, so it's a trade-off and I'm happy.

Thanks for all the great comments about Friday's post. K&A stopped by work this morning on their way to the dorm. I'll get to see it on Saturday when we swing by to pick her up on our way up north. It feels funny that I'm not helping her, but that's the way she wants it. I recall telling my own mother that she didn't need to walk me to my 6th grade class (or any other thereafter), and hearing the same from my kids, but a part of me still wants to hold K's hand and make sure everything's okay. It's good this way, I know it is.

Cromarty looks awesome! What a terrific idea to use the calmer for it. That reminds me, I have some more calmer in my stash.... ;0) And St. Brigid in cascade 220 - another great idea. Super projects!

wow. I keep hearing great things about threadbear. I'll have to order from them one of these days.

I'm so in love with your Cromarty. Since I'm already staring my list of what to knit NEXT year, I think Cromarty is going to be near the top.