It's just my nature
Getting my fix 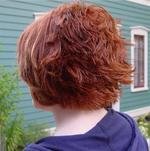 Where do I begin? How about the first thing I noticed when I got home last night -- I wasn't even out of my car yet when I saw A with a new 'do. She did it herself! If she isn't an interior designer when she grows up, then perhaps a hair stylist (she did M's, at right, a couple of weeks ago) -- or maybe a hair-styling interior designer and wouldn't that make for an interesting episode of While You Were Out? 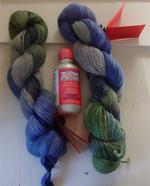 The second thing I noticed was a box -- from my Pal! It was lightweight and it was not marked "fragile." Whatever could it be? Oh yeah, it's "AlCaMi"! Mmmmmmmyummmmy. It's a very fine Alchemy alpaca in a colorway called "Night Sky." It was accompanied by a bottle of Eucalan. Hey, Secret Pal, it's terrific -- Thank You! It was so much fun to play Concentration, too, even though you had to give me numerous hints! 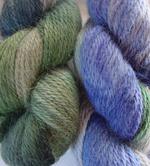 So, y'all, what shall I do with this lovely stuff??

With the camera already in-hand for the SP2 photo shoot, I photographed the "slubby" yarn to better illustrate a "slub." Christina, a picture is worth 1000 words. I could not get a good close-up. It doesn't really matter, though, because this incarnation of Lovlund is now Lovlost -- the yarn isn't right and I think the gauge is off, too. I will try again someday, and let's hope it'll be Lovlust. The Cyclone is now destined to be a scarf or two (Christmas presents), perhaps paired with another fiber. 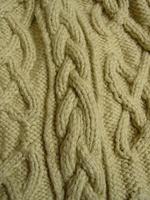 Oh my goodness, NO. I am not ripping all sixty-bazillion rows to fix the two miscrossed cables. Over the weekend, I'll be ripping down those 9-stitch repeats, one at a time, fixing the mistake, and hooking them back up. Unfortunately, this is a road I've traveled before. Others have been in this area, as well (June 7th), though she, at least, had a good reason. Mine can only be inattentiveness. Why only those two cable repeats? Why not the ones at the sides? (I might not feel as compelled to fix those!)

On Thursday night, DH and I took the grrs to dinner at Famous Dave’s. We’d never been there before and we all liked it quite a lot. Several years ago, while working at the antique mall, a man came in and made quite a stack of finds in the office; turns out he got to run around and buy stuff to decorate Famous Dave's restaurants. I want that job! Afterwards, we tripped over to Barnes & Noble, where I snagged the most recent issue of Cast-On.

Yesterday, Crafter’s Choice Book Club sent me an email offer that I couldn’t refuse, and coming soon to a mailbox near me will be Knitter’s Handy Book of Sweater Patterns and Knitter’s Handy Guide to Yarn Requirements, both by Ann Budd. I’ve seen the book around the blogs and I think I’d make good use of it; I almost bought the guide at my LYS last week. Meant to be.

Last, but not least, ThreadBear comes through. This is the first time I’ve ever done business with “the boys,” and you can bet that it won’t be the last. Topping the list of the reasons why is the simple fact that they replied in a very timely manner (and I know they’re darn busy these days). They have “tons” of Calmer in my color and lot, so I’m ordering it up. And, they’ll be most happy to supply/enable me, in whatever manner suits me, at a much lower price and without the 10% special order mark-up from another source (that I was supposed to hear from on Monday and, what do you know, it’s Friday and still no reply), with the Cascade 220 (color 4010) that I want for St. Brigid. Yup, I’m a happy girl.

Okay, really, THIS is last… I finally frogged the Silky Wool cable scarf that I started a few weeks ago and cast it on for IK’s Flower Basket Shawl (only one false start) while watching the Olympics* last night. At first, I wasn’t sure I liked it, but I completed the initial 24-row chart last night, and I think it’s okay.

*Way to go Carly Patterson! And what about Paul Hamm the other night? He’s from Wisconsin, you know. **grin** I’ve always loved gymnastics and still get misty with emotion with I recall watching Nadia.

I LOVE your colour choice for St. Brigid...it reminds me of autumn!!!

That Alchemy yarn is lovely. Don't you just love having a secret pal. They are the best! I just bought some Silk purse by them. :) Glad your gatting the book..you'll love it!

Love your pictures! You will have cables down to a science when Cromarty is done. Then you'll be whipping out Starmores and Zimmermans all over the place! I'm glad to hear "the boys" are up and running again. I've been wanting to get a Charlotte put together for me. Time for an email to Threadbear! (I actually only live a little over an hour from them now but have ordered from them in the past with wonderful results.)

Now I get "slubby" thanks! The guys at Threadbear are my favorites for ordering. I still feel like I'm getting the personal attention of shopping in a LYS even though I am nowhere near Michigan. (And they don't overcharge for shipping like so many other online retailers do.)

great pics and that alchemy, yum...my! i've got to get that sweater book by budd.