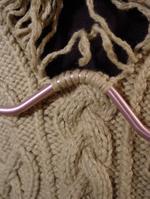 I still didn't count how many rows I had to rip out in each of these sections to fix my mistakes. It's over 60. These pics are after ripping the first 9-stitch cable and hooking up a few rows. I got a rhythm going before too long and it's not hard, just very tedious... I finished the first cable last night and got a start on the second. I hold all the yarn from the ripped rows on a stitch holder and release only the number of threads that I need to fix each 4-row section. There's a cross every fourth row, so I arrange the stitches on a holder (a cable needle), then hook up four rows, leaving the stitches on the crochet hook, then transferring them to a holder -- and then I do it again, and again, and again! Sometimes the stitches are a little bit wonky, so there's some tugging and pulling to get the stitches evened out. I employ a few cable needles, stitch holders and a crochet hook in this endeavor. It's looking good. 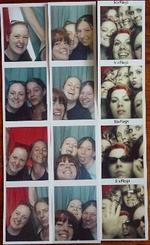 I love photo booths! The two on the left are from last Sunday -- my two eldest, sister, and niece; the one on the right is from K's before-we-head-back-to-school trip with friends last Thursday. I think I count six faces.

We went to Mom's on Saturday night to watch the second Packer pre-season game. We enjoyed cheeseburgers along with the morning's farmer's market bounty during the first quarter. We then retired to the family room where Mom had the lights very low. I was intending to work on the above-mentioned cables but it was too dark and I thought, well, that's okay. Midway through the second quarter, there was barely an open eye in the place. Do I even remember half-time? By the start of the third quarter -- with my stepdad snoring and Mom sprawled between the sofa and the ottoman, I decided that I'd just go home. I could hardly rouse Mom to tell her and she looked at me glassy-eyed, probably wondering what I was doing there in the first place! I had the lights on a bit brighter at home and got to work on my cable while watching the rest of the game and then the Olympics.

It was SO nice to have a weekend at home. I finished all the transcription I was doing for my sister and updated DH's website. Yay! I borrowed a boom box from work that had a tone control dial and that really helped with the transcription. She'll have more for me (follow-up interviews) in November, I think. I had to chuckle when I started the third interview -- the first two were with men, and this one was with a woman. There was little or no extraneous chit-chat with the men, but with the woman it was, "Oh, by the way, how was your vacation and how are the kids?" It was interesting, really listening to how people speak and putting it down on paper...

Last night, M was in the mood to shop. She got out her school supply list for 8th grade, crossed off what she already had, and circled what was still needed. She hates to shop (though at 13, I think that'll start changing), so I thought I'd better strike! School starts a week from Wednesday! K has already started packing her stuff to move to college -- a week from today!

Thanks for coming by and 'playing' is my blog contest. My toes still 'feel pretty' today! You have a great blog, too and I'm very happy to see you fixing the cables that way. No reason to frog it all!!

The undone cable is terrifying! Good job bringing it back to order.

I swear I almost fainted looking at your undone cable...excellent that you could recover it...you have nerves of steel!

Love your blog...any chance you are from/or living in St Louis? That's my hometown! :)

Wow, thats a picture guaranteed to strike fear in the hearts of knitters everywhere! you ARE brave m'dear! Are you dreaming in cable patterns and knitting abbreviations at night yet ;)

And there I was last night feeling all self-satisfied that I frogged back a measly four rows coz I had gone too far in one of my SIMPLE cables in the artist formerly known as Tina.....! I'm just catching up on you....I see you've been transcribing. How awful. (hee) Thankfully I don't have to do it from a tape very often, or I'd die. The computer does it all from my steno now, and I only have to read and edit. Still, it takes longer than I wish sometimes!

WOW!
The cable picture made my jaw drop.

I can't believe what you had to go through with those cables! I'd be really scared. I'll get in touch with you if I ever have to do a cable repair! LOL
Cromarty looks unbelievable. I can't wait to see it finished. Beautiful job. And you gave up on Audrey? Audrey is much easier! :-)