While you were out
The kids are on a roll

Wow! Am I a lucky mom, or what? Yesterday was my While You Were Out day. It all started on the weekend of March 20th when one of my sisters was visited. She needed a birthday gift for someone -- a picture frame, specifically -- and she knew right where she wanted to go to buy it, a store that K, A and I had just been. K&A tagged along with her and when they got home, I was instructed to close my eyes while K whisked something up the stairs with her. It didn't take me long to figure out that it was likely the big picture frame that looked like a window that I'd ooohed and aaahed about earlier.

Fast forward to the week before Easter. Husband asked if I would like to take a day trip on the Monday after Easter; the grrs had something planned for me at home. At the last minute, something came up and they couldn't do it that day, so I've had time to think. Well, of course my wheels were turning! It was obviously my own little WYWO thing -- but what were they planning to do? Our bedroom came to mind first, but I decided that they'd never get that done in a day, not with all the c-r-a-p in there that they wouldn't know what to do with. I remembered the picture frame -- I'd said that I didn't know where I'd put it, but K&A both said they'd put it in the upstairs hall. Aha! 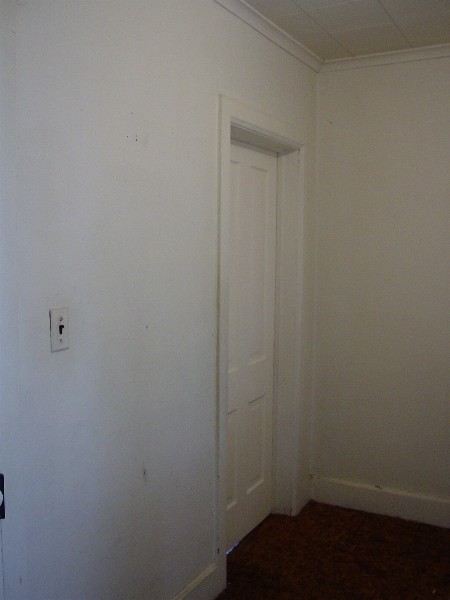 So, I suspected that it was the upstairs hall (K had done a little pre-cleaning last weekend), and I was right. A few years ago -- after I pulled down all the lovely acoustic tile in the front rooms and left a perforated lathe and plaster ceiling that sifted dust anytime someone walked upstairs, and after my sister and brother-in-law came (quick!) to help us put up drywall, and apparently because sis & I had nothing to do while the men taped and mudded the seams -- we pulled up the carpeting on the first few stairs and the landing. I'd already ripped it off the floors, finally fearing the carpeting more than what I might find underneath. It took forever, and there were a million staples and nails to remove! I just never got the spurt of energy I needed to remove it from the rest of the stairs and the upstairs hall. They're also VERY creaky stairs, and I knew that the carpet was helping to muffle that a bit. (You can see the new picture frame to the left, and the dollhouse that we made when K was just a baby.) The color is "Victorian Gold," and I love it! What a perfect project for the grrs! K&A both love to decorate and they have a good eye. M kept the dog out of trouble! Their dad was able to lend a hand toward the end to help with the tall corner that needed patching. Our house has been remuddled a time or two over the years, but I give credit to whoever decided that this beautiful floor had to be recycled -- perhaps not with the greatest of care, but at least it didn't land in the burn pile. 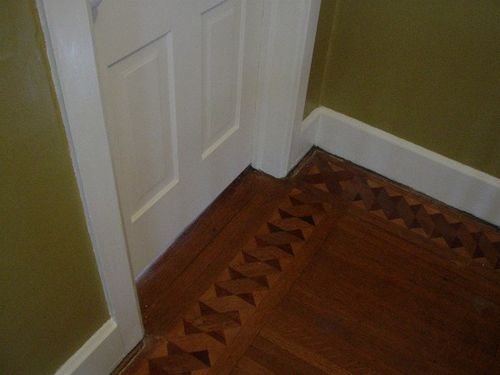 Meanwhile, my mom and I had a very nice day together, stopping at some antique shops, a new quilting shop and finding fabric for her project, stopping at my LYS (still no Calmer), and visiting my grandma -- an aunt and uncle also showed up, as did my brother for a few minutes. We returned 45 minutes later than expected, but I still needed to be "out" for a while, so ran to pick up something to eat. The paint was still wet when I was allowed to see, but they did a fabulous job!

Today, I'm catching up on all the laundry I didn't do yesterday. I managed to seam the rest of the Cecil sweater and weave in some ends -- still have a few ends to go, and then buttons! I knitted about four rows on the Summer Sonata last night, and that's it! I'm hoping that I'll get a little more knitting time in tonight. Other than that, I'm enjoying my early Mother's Day present!

What a great gift! Your hallway looks lovely and that floor is unbelievable! Enjoy :)

Thanks! I am really enjoying my new hall; the kids are very proud of themselves -- and rightly so. Gearing up for the Father's Day thing...